Tramore Hotel is Reduced to Ashes

Gardaí are putting significant resources to identify arsonists believed to have a started a fire on the site of the vacant Tramore Hotel on Strand Street.
The fire started after 5.30pm on Saturday last but it is believed that a few youths had been in the area between 4 and 5 pm.
House to house enquiries are being made in the town and a major investigation is underway. CCTV footage is also being investigated from a number of sources and business premises nearby. Some locals report a youth running away from the scene after 5pm. 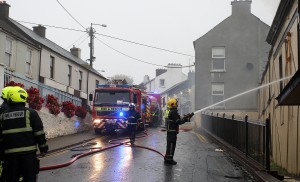 Fortunately no neighbouring property has been damaged nor any injuries reported. A rainy night and day might have helped on that front
The building is now in an unsafe condition, Sergeant Mick Whelan of Tramore Garda Station told The Munster Express last Sunday.
Engineers from Waterford City and County Council were on site on Monday to look at the hotel’s chimney and the feeling is that it may fall soon and may have to be brought down by Council staff. Some of its wall has already fallen in.
None of the firemen – who were on the scene on Saturday from after 5.30pm to 10pm – would go into the property, given its dangerous condition, so hosed water from the outside and from the ladders instead. All units of the local fire brigade were on the scene, which saw the street closed off to cars and pedestrians. It is still closed as we update the story on Monday morning.
On Saturday, this newspaper met with some of the local householders after the fire had started and they noted how a serious fire had also occurred there a few years ago. This part was not on fire Saturday although close to an adjacent building above. 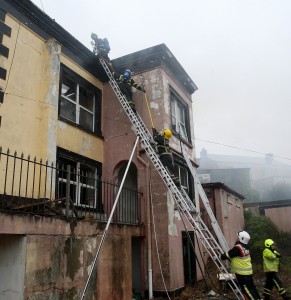 The building is now unsafe, according to Gardaí. | Photo: Jim O'Sullivan

Last weekend’s fire was located in the middle part of the building, so neighbouring property was not in danger, but they could feel the heat. The Red Lane clothing boutique was near the end of the trading day when the fire occurred and staff had to leave early as the building got too warm and debris started getting flung through the air.
In a fine example of the power of modern media, one man living across the road from the fire learned of the blaze thanks to his brother in London, who had seen the destruction on social media there.
The Terrace opposite the ill-fated building overlooks the area and overlooked the fire, and while on normal days they have lovely views of the bay, on Saturday it was a smoky building.
A crowd of onlookers were drawn to the top of Strand St and the Cross to see what was going on, with one Queen Street resident describing how the blaze was too close for comfort and would not like to see a repeat.
Earlier in the summer there had been some fire damage to the Sandhills caused by local youths and there is still a black scar down there of burnt grass as a reminder.
Fortunately for Tramore it had been raining without much wind so the fire was put under control by the fire brigade, but flames had been shooting out of the building early on and there were some flare ups again as the evening wore on.Gardaí stayed on duty in the area after the fire brigade left shortly after 10pm on Saturday.
The vacant site had recently been on the market, with future use as a car park mooted by the Council.
According to Council sources, the intention may be to have its new private owner lease it out to the local authority for long-term use as part of the strategic development of the town.