IN A bizarre case of ‘Elf and Safety’ gone mad, a local Council worker has been instructed to refrain from wearing his popular festive attire. Local authority worker Joe Fitzgerald has become a familiar sight in Tramore as he travels around the town in his road sweeper wearing his festive outfit each year.
However, Tramore’s popular ‘Santa Sweeper’ has once again been forced to hang up his outfit as a result of health and safety regulations. 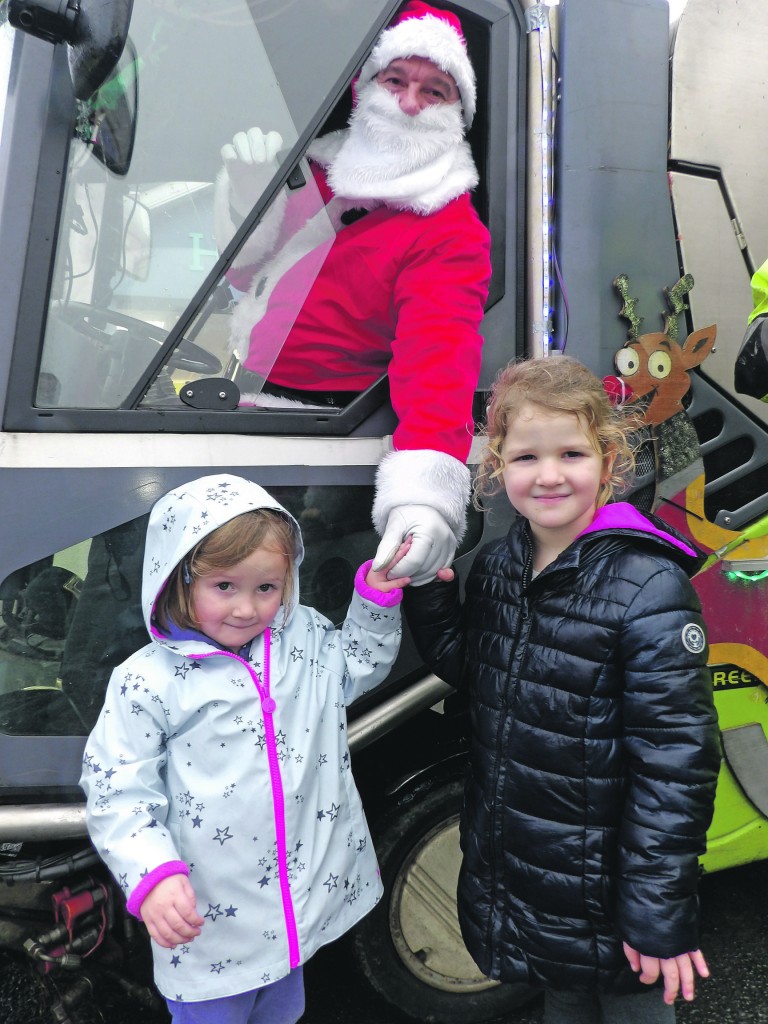 Aoife and Shauna were delighted to meet and shake hands with Santa Sweeper Joe Fitzgerald after school at Tramore's Holy Cross. However, Joe will not be decked out in his traditional red this Festive Season.

Controversy erupted in 2016 when his Santa suit wearing days came to an abrupt end following a decision made by Waterford City & County Council. The Council asked Mr Fitzgerald to refrain from wearing the suit as a result of fears that it does not meet Irish PPE (Personal Protective Equipment) requirements.
The decision prompted an outcry in Tramore, with an online petition in support of the town’s ‘Santa Sweeper’ attracting many signatures.
In 2017, Joe was allowed to be ‘Santa Sweeper’ for one day during December ahead of the festive period.
While he was allowed to participate in the switching on of the Christmas lights in Tramore this year, he has once again been instructed to hang up his Santa suit. In a statement to The Munster Express, a Waterford City & County Council official said: “The Council has concerns that young children who may see Santa in the roadsweeper could run out in front of other traffic or fall under the sweeper, therefore Santa no longer works as a roadsweeper for the Council. However, Santa did arrive by sweeper at the switch on of the Christmas lights in Tramore last week where there were plenty of staff on hand to ensure his safe arrival and he distributed selection boxes to the children there. ”
Many locals are flabbergasted by the move and say they would like to see Tramore’s ‘Santa Sweeper’ have a greater presence in the town. “He has been spreading good cheer without fail each year around our town,” said local woman Tina Schley. “If you can take time during your working day to spread a little Christmas cheer and to brighten the day of all those around you, then you truly are giving. Last year, it was magical to see the excitement all over the faces of the children when they saw the ‘Santa Sweeper’ and his elves Paul and Sam. Cars were honking all day with the joy of seeing the ‘Santa Sweeper’ in action. A simple wave from Santa and, for a short while, you forget about the madness that comes with Christmas and you just enjoy the moment.”
She added: “Words can’t describe the impact the ‘Santa Sweeper’ has on the children and the whole community of Tramore. He may have had only one day to spread some Christmas cheer last year but he packed more festive cheer into that one single day than most could do in a week.”