Varadkar: "case for second Cath Lab at UHW "is strong"

Taoiseach Leo Varadkar has admitted that the case for a second Cath Lab at University Hospital Waterford (UHW) is strong, adding that it’s not within his gift to allocate such a service provision. Speaking at the ‘Project Ireland 2040’ roadshow held at the WIT Arena on March 9th, Mr Varadkar said he was “very aware” of the ongoing debate regarding cardiology services at UHW.
Referring to the ongoing National Review of such services, the Taoiseach stated: “I think the case, certainly for a second cath lab in the hospital is a very strong one. We’ve seen the fact that having a mobile cath lab in the hospital has made a big difference in reducing waiting lists, and knowing the business as I do as a doctor, having two cath labs makes a lot of sense in different ways because it’s very often the case that one of them may be out of service or being renovated or can’t be used for a particular period and certainly I’m looking forward to seeing that (review) report. I really expect, or at least I hope, that that review will support the case for a second cath lab in Waterford, in the hospital and will allow us to go ahead with that. In addition, the 24/7 (cardiac case) is a slightly different one, but I certainly think the case for having a second cath lab is a very strong one.” 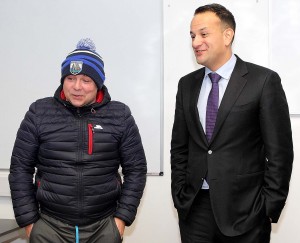 He added: “I think when we do any review, we need to not just look at the statistics (as they stand) at the moment, when we do any review we need to factor into that the population increase that we expect to happen in the South East region over the next 10 to 20 years.”
With the Dunmore Wing (including the long awaited Hospice Unit) nearing completion at UHW, the Taoiseach said it’s likely that “we’ll probably need another one after that,” adding: “so I think we’ll see further developments at the hospital in the year ahead”.
In response to a question from the floor on cardiac care at UHW, Mr Varadkar said that any additional service provision “had to depend on the best clinical advice of experts looking at it”.
Stressing that he “wasn’t qualified” to deliver the answer to a question which has been discussed by thousands across the region over the past four years or more, the Taoiseach stated: “decisions on where we locate specialist services have to based on clinical facts. We took a decision a number of years ago, it was very controversial, it was actually a previous government and they were right to do it, and they took a decision to centralise a number of cancer care centres…and as a result of that, the quality of cancer care improved and the number of people surviving cancer is now much higher than it was. And it wasn’t politicians (who did that), it wasn’t Mary Harney who sat down and decided to do that, that was based on the best clinical advice, the best clinical evidence from people who were objective and didn’t have an axe to grind or in any way affected by it. We’re doing something similar now in trauma as well with a designated number of trauma centres, so it has to be based, like any specialist service…and you have to be doing a minimum number of cases a year to be able to do it to the best standard and that’s what the debate is about at the moment.”
Mr Varadkar added: “I’d like to see (the cath lab) happen, of course it would. It’d be great for us (Fine Gael) politically, it’d be much, much easier for us if that was the case but I can’t just say it’s the right thing to do without the objective facts. I know the numbers to be adequate and that’s what the National Review is all about.”