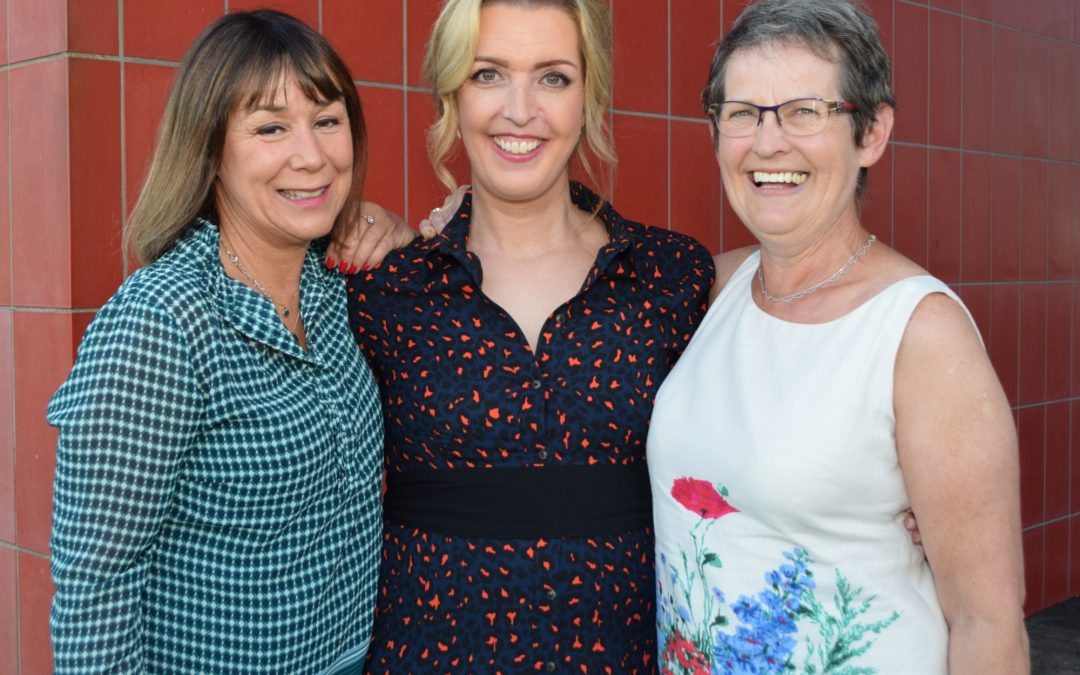 Eoghan Dalton reports
Vicky Phelan paid tribute to her former work colleagues for their lasting support at Waterford Institute of Technology last week. The Mooncoin woman was Head of the Literacy Development Centre at the Institute, having first joined there in 2006, and she was surrounded by family, friends and old workmates at the launch of her memoir ‘Overcoming’.
“Those women saved me from myself on more than one occasion,” she told the audience at the Tourism and Leisure Building.

The book looks at how Vicky unearthed the medical and political scandal which saw her and 220 other women who were diagnosed with cervical cancer were not informed that a clinical audit -carried out by the national screen programme CervicalCheck – had revised their earlier, negative smear tests, meaning their cancers could possibly have been preventable.
In ‘Overcoming’, Vicky shares her remarkable personal story, from a life-threatening accident in early adulthood through to motherhood, a battle with depression, her devastating later discovery that her cancer had returned in shocking circumstances – and the ensuing detective-like scrutiny of events that led the charge for her history-making legal action.
She said that to have her book launch in WIT, one of the educational institutes that shaped her life, was important. “Education saved me,” Vicky said. The launch was marked with tributes from friends and colleagues past and present. Breda Keyes, who taught Vicky French and English at Mooncoin Vocational School, noted her former student’s love of learning and language, and that she used these skills to highlight the cervical check debacle.
“I always knew Vicky was destined for greatness and her role in public life has surpassed anything we could imagine,” she said.
Ms Keyes added that she had been building layers of resilience for years and that she found ‘Overcoming’ to be “crushing reading” in places. Repaying the tribute, Vicky Phelan said she wouldn’t have gotten to college without Breda’s influence.The book’s co-author, Naomi Linehan said it had been a privilege to work on it alongside Vicky.Richard Hayes, WIT’s Vice President for Strategy, said that the institute’s “community bursts with pride with mention of Vicky Phelan”.
Describing the book, publicity director at Hachette Books Ireland Elaine Egan said the memoir was a book which stood out from the herd and which had the potential to make a difference in the lives of others. “Like most people in Ireland, before we met in person I knew a public persona of a woman who showed singular composure and ability in the face of adversity – we all recall the impact of her memorable speech from the steps of the Four Courts, when she refused to remain silent on what broke as one of the greatest healthcare scandals of our time, shaking up a system in her wake that you could say was committed to self-preservation and damage limitation over the rights of women and families.
“When I first met Vicky in person and she shared more of her story – and the life events that led her to the present point – it was clear that she was not only a remarkable woman, a loving mum, a person with a fine mind, and a survivor who, had withstood worse things than cancer. But she was also great craic, down to earth, very straight up and easy to relate to.”
Ms Egan concluded by giving an indication of what lies in store for readers:
“Without giving away too much, there is a scene at the opening of the book which I guarantee you, you won’t forget. It is a true story, it involves being chased by a horse, and it sets the tone for the journey that follows.
“Whatever the challenge – however unforeseen, unusual, challenging or indeed plain frightening, here is a woman who rises to it, and who steers a course in survival that is as unforgettable as it is remarkable. Long may you shine Vicky, and here’s to the great success of your first book.”
‘Overcoming’ is out now.