Kieran Walsh Reports
There was a great attendance at Mass held at the Church of St Joseph and Benildus at Newtown, Waterford on Friday last, as Waterpark College marked the 125th anniversary of its foundation.
Most of the school’s current student body were in attendance, in addition to past pupils, parents and friends of Waterpark.
It was a fine ceremony, celebrated by Fr Liam Power PP, who was assisted by past pupil Fr John Delaney, uncle of the FAI Chief Executive of the same name.
The excellent Waterpark College Choir sang really well during the Mass – a mixture of boys and girls in what is now of course a co-ed school.
They won particular praise from Deputy Principal Joe Hagan, who informed the happy students of a weekend free of homework, in addition to the half-day they also enjoyed on Friday last.
We listened most attentively to solo singer Emily Myers, in addition to Kevin Glockner and Harriet Wolfe (both on flute), who created a fine blend towards the end of the ceremony.
Principal Tom Beecher provided the keynote address at the close of the ceremony.
He paid tribute to the Brothers of the past, led by Blessed Edmund Ignatius Rice, the founder of the Christian Brothers, who brought Catholic education to Waterford, later to the rest of Ireland and overseas, having initiated his schools first in Waterford, followed by Carrick-on-Suir. 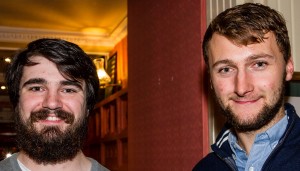 Mr Beecher referred to Waterpark College’s great history, describing it as a school that created many graduates for Waterford, Ireland and abroad. There is much to be proud of in this institution, he said, from which hundreds, indeed thousands, had since excelled in their respective fields.
The current student body comes to 500, a third of which is now female (163). Mr Beecher said the school is now flourishing after a century and a quarter of service and a new extension has been planned, which we’ll have further details on in a future edition. 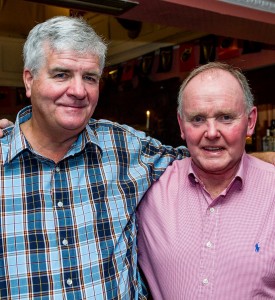 Fintan Power and Bob Murphy (Class of 1970) pictured at the Munster Bar.

The Principal said that Waterpark College must now meet the challenges of a complex society and provide a strong education in an education and learning space that involves day care for students.
During his homily, Fr Liam Power noted how the school can hold its head high given its man achievements and distinguished past.
Waterpark College first opened its doors in 1892 and was seen as a new school for the local business families who wished to their sons receive a good education and from there, advance into business and the professions, which were not easily accessed by Catholics in the late 1800s.
The college aimed to train Waterford students for the business world, both at home and away at a time of growing prosperity from the 1890s onwards in Ireland.
Theirs was a “whole new vision, a vision of hope so that students could reach their potential and there was much to be proud of in the school’s achievements” , added Fr Liam Power.
Past pupil Pat English also spoke most eloquently of how the school had been a great benefit to both him and others and that all who passed through its doors ought to feel gratitude for the education they received there.