Waterford’s stunning Greenway has scooped gold in the coveted All Ireland Community and Council Awards and has been crowned Ireland’s ‘Best Tourism Initiative’ in the competition.
It has also taken the ‘Grand Prix Award’ for 2018, a special commendation for outstanding excellence and an award presented only to projects that receive the highest marks from the competition’s esteemed judging panel. The Awards wree presented on Saturday last at a ceremony in Croke Park.
It’s a spectacular double coup as the 46 kilometre off-road cycling and walking trail edges towards its first birthday celebrations on March 25th. 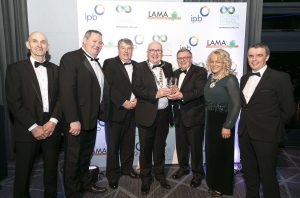 Competition was intense and all involved with the Waterford Greenway should be very proud of the All Ireland title wins, according to Michael Walsh, Chief Executive with Waterford City & County Council.
Paying tribute after the awards to the staff who maintain the Greenway and the communities who have embraced it, Mr Walsh said: “Some counties and communities talk about being self-sufficient, about providing local employment, enhancing their natural resources for their economic, social and cultural benefit and for generations to come. We’ve developed the Greenway and they have come – in their droves.

“The Waterford Greenway has transformed this county. There is no doubt about that. The economic benefits are evident everywhere you go. Coffee shops, hotels and other accommodation providers, bars, shops, restaurants, bike hire companies and more all reporting a boom in trade.
“But the real winners are the people of Waterford who have been such great Greenway ambassadors as well as the families, the groups and individuals who use our Greenway again and again and who are reaping the health and wellbeing benefits. That will be its true legacy, I believe.”
Trails Officer with Waterford City & County Council, Johnny Brunnock, was among those to accept the IPB Insurance and Local Authorities Members Association (LAMA) Awards at Croke Park. He was over the moon.
“It has been an incredible first 10 months for everyone associated with the Waterford Greenway. It has given us all such a lift in so many ways. Over 250,000 people have already visited the Waterford Greenway and the economic, social, sporting and other benefits it has brought are simply unbelievable. It’s brilliant to see so many local people, visiting families, adult groups, clubs and societies using the Greenway and spending time in Waterford,” he said.

Figures released in early December show that since it opened last March, 247,545 have enjoyed using the Waterford Greenway. Of these, 105,639 were on foot and 141,906 have cycled it. Well over 9 out of 10 (94%) of visitors to the Waterford Greenway (www.visitwaterfordgreenway.com) rated it as either excellent or good.