Waterford healthcare issues were highlighted by local TDs during the first sitting of the 33rd Dáil last week.Four party leaders failed to win enough support to be elected Taoiseach on Thursday last, with Sinn Féin leader Mary Lou McDonald winning the most votes.
The Dáil has adjourned until Thursday 5 March and the talks seeking to agree a programme for government are set to intensify. 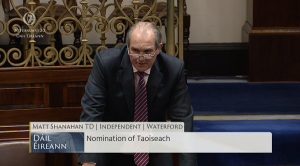 During last week’s, sitting newly elected Independent TD Matt Shanahan told the house that he would not be voting for any of the four candidates nominated for Taoiseach as a mark of protest.“I was elected to represent the constituency of Waterford. I also represent the people of the south-east region,” he said. “I will not be supporting the nomination of a Taoiseach tonight as a protest against the fact that the south-east and Waterford suffer significant discrimination in the provision of cardiac services at University Hospital Waterford. There are five national cardiac centres in the country and the one in Waterford, which treats 500,000 people, is the only one that is restricted to 39 hours access. It is the only one that must ferry people by ambulance or helicopter, when available, to centres in Cork or Dublin, delaying their transfer times and therefore causing them additional cardiac damage. Between 2015 and 2018, HSE data showed that only 1.5% of patient transfers carried out in that period, which totalled more than 300 patients, were received at an alternative cardiac centre within the appropriate timeframe. This is unacceptable to me and should be unacceptable to every other Member.
He continued: “I will not vote in favour of a Taoiseach this evening but I hope to give support in the future to a progressive programme for Government. However, it must have equity and fairness at its heart. When people look at that programme, I want them to see themselves reflected in it in terms of the challenges we face in education, housing, healthcare and homelessness. I will do all I can to work with every member of the House to achieve that.”
Meanwhile, Waterford Fianna Fáil TD Mary Butler used her first speech of the 33rd Dáil to highlight housing and healthcare issues.
She also spoke about respect, pointing out that her mandate is as important as anyone else’s.
“Today I stand proudly re-elected to the 33rd Dáil with a mandate I received in Waterford. My mandate is as important as anyone else’s and must be respected the same as everybody else’s. Some 160 people were elected to this Dáil a few weeks ago, and we all deserve the same respect,” she said.
“The main job at hand is to put in place a secure, responsible Government that can deal with all the issues, but which can also deliver on those issues within the fiscal space available to us. We all know there are many issues relating to housing and homelessness, but once again I would like to focus on the lack of home care supports and the fact that 7,800 people cannot currently avail of home care support packages in this country. That adds to the trolley numbers and the number of late discharges. We also need equality of healthcare, regardless of where one lives. We should not have any more postcode lotteries, which depend on where one lives, for healthcare or cardiac care.”