WATERFORD is to bid to feature in a high profile Viking roadshow festival which will travel across Europe.
‘Follow the Vikings’, which is funded by the European Union, is a partnership between 14 European regions with links to the Vikings and is aimed at developing a Viking Cultural Route. 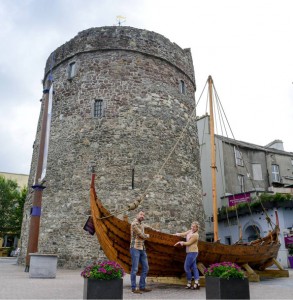 Hopes are high that Waterford will be included in the ‘Follow the Vikings’ roadshow which will travel across Europe.

The roadshow will create 12 festivals over a three year period and kicks off this year with festivals in Denmark and Sweden.
Two sites in Norway and Ireland will hold celebrations in 2017.
Eamon McEneaney of Waterford Treasures explained that one location will be chosen in Ireland but he hopes that funding can be secured in order to ensure that two locations will be featured in the roadshow.
He said Waterford Treasures was working closely with Dublinia in Dublin and added that he was “optimistic” that two locations would be selected.
It’s hoped that the Viking brand will be developed throughout Europe and sites and museums related to the Vikings will be marketed as tourist destinations.
The organisers have put out a call for artists, actors, musicians and writers to present the Viking story at 14 sites across Europe.
The roadshow will also visit locations such as the Shetland Islands, York and Ornavik in France.
Meanwhile, in other tourism related news, data from Hotels.com shows that Waterford was Ireland’s most affordable destination in 2015 with an average room rate of €84 per night.
The website’s annual Hotel Price Index found that Dublin has the country’s most expensive hotel rooms, jumping 20pc to €129 on average.
Other results saw prices in Belfast jump 23pc to an average of €123, while average rates rose 11pc to €103 in Cork and 8pc to €119 in Killarney.