Waterford "leading the way" in Repair and Leasing Scheme

WATERFORD is leading the way in terms of the Repair and Leasing scheme, according to the Housing Minister.
A pilot Repair and Leasing scheme was launched in Waterford and Carlow in October 2016.
On Thursday morning of last week, Eoghan Murphy TD, Minister for Housing, Planning and Local Government, visited a house which was unveiled as part of the Repair and Leasing Scheme at 23 Barrack Street.
“It’s great to see Waterford leading the way in terms of getting new homes opened up for families,” he said.
Minister Murphy said the experiences in Waterford would be discussed as part of the housing summit taking place at Custom House Quay yesterday (Monday). 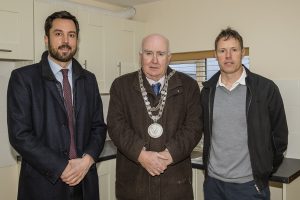 “We will be talking about a new version of the Repair and Leasing scheme so other parts of the country can be as successful as Waterford,” he said.
However, official figures show that, nationally, no new units came on stream as a result of the Repair and Leasing initiative for the first three quarters of last year.
The Peter McVerry Trust has said the scheme is not working as it was envisaged and needs to be changed.
The Department has said the initiative has been reviewed and the results will be announced shortly.
Developed to bring vacant properties into social housing use, the Repair and Leasing Scheme is aimed at owners of vacant properties who cannot afford the repairs needed to bring their property up to the standard for renting.
If a vacant property is suitable for social housing, the cost of necessary repairs is met up-front by the local authority or an approved housing body (AHB).
The property is then leased to the local authority or AHB, who will make it available for social housing.
The owner receives an agreed lease payment from the local authority or AHB and the value of the repairs will be gradually offset against this lease payment over a specified period.
Minister Murphy met with Waterford City & County Council CEO Michael Walsh prior to arriving at Barrack Street, saying he had a “very constructive meeting” where they discussed a range of topics including the North Quays development. 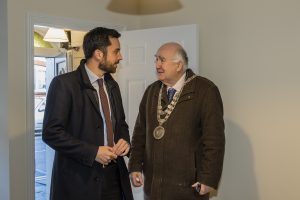 Social housing targets for Waterford were also discussed.
Referencing the Rebuilding Ireland five year government plan, the Minister said figures from 2017 show that the plan is working and that “we’re moving in the right direction”.
“But a lot still needs to happen,” he said.
“We want to make sure, and I want to make sure as Minister, that we continue to be ambitious and work hard on solving this crisis throughout 2018.”
During his visit to Waterford, Minister Murphy also officially opened the Catherine Walsh Trust and Saint Vincent de Paul Housing Scheme at Convent Hill, Tramore and the Ormonde Square Project, Dungarvan.

For more on this story see page 28-29 of this week’s Munster Express newspaper
Photos: Mick Wall