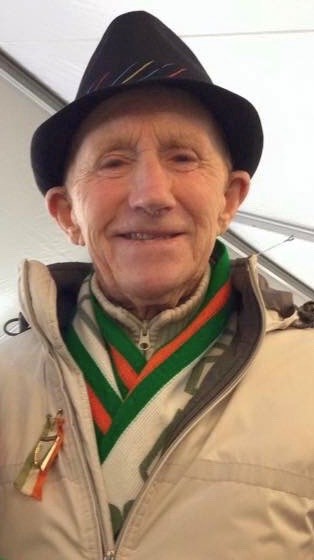 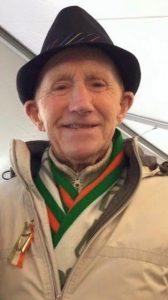 A Waterford man aged 86, Tommy Goulding of 77 Dominic’s Place, a former soccer player for Waterford FC, died in the USA where he was a resident after being attacked by dangerous dogs earlier this month.He passed away in hospital in Minnesota on July 9th.His family were in Waterford and Tramore in the past week for his funeral mass in Ballybricken Church and for the spreading of some of his ashes in Tramore Bay.
Tommy had been retired a number of years and ran a pub in St. Paul Minnesota in the mid-west of the United States and previously ran a construction business.The dog attack occurred on July 6th when he was going to his mailbox and two savage dogs from a neighbouring house went for him, knocked him over and bit him on the chest.
His family got him to hospital and, due to shock failed to tell doctors he had been bitten. He suffered three heart attacks over two nights and passed away in front of his family, who were very upset when we met them recently in Tramore after the funeral.The dog owner eventually had to own up to the ownership of the dogs after initially hiding them from the authorities. A policeman forced the issue and said it was prison for perjury or surrendering the animals. They were duly put down, but with no insurance, no compensation was possible for the family. The dogs that attacked him were a pit bull terrier and a German shepherd dog.
We spoke with Tommy’s wife Madge from Newport’s Lane off the Yellow Road and she was still upset as she recounted the story of his death.
She is also of similar age and said how her husband hung on till he saw one of his grandsons as he lay on the hospital bed and then passed away. She commended Fr. Mullins for the funeral mass in Ballybricken, which was well attended. He was buried afterwards in Kilbarry new cemetery.His daughters recounted his love of soccer and Waterford. Up to recent years he came regularly back to Waterford and Tramore, which he loved more than Ireland itself.He was great friends with Alfie Hale and Alfie gave an interesting eulogy at the funeral in Ballybricken Church that went on for 20 minutes recounting great stories of the past. Tommy played with Alfie’s brother Dixie and Harry in the Waterford soccer team in the mid to late fifties, when the Fitzgeralds were also there.
Known as “Inky”, he played at number 7 and later his 3 daughters would also play in same position and do well in soccer in USA.Tommy did well in Waterford and then went to London where he played a number of matches with Fulham, and work part time as a driver there prior to emigrating to the USA in 1960, where he had a successful career in the building business and in a pub. His bar in St. Pauls Minnesota was called the “Irish Well “. There he could display his story telling abilities and his singing also and was widely popular in the city.
His family described him as a great storyteller and how they learned about Ireland from him.Today he is even still remembered in Waterford and Tramore for his soccer and storytelling skills.He was very active and agile even up to latter years as he was so fit all his life.He also liked a game of golf in Tramore when he was home with Alfie Hale and friends.
Tommy and his daughters were doing a book on his life and it is nearly completed. They recount his days in Mount Sion at school and later in De La Salle.He played for local junior side Bohemians before joining Waterford. When he left school he worked in Denny’s meat factory in the city. His daughters recalled how he disliked the foreign games ban of the GAA which existed at the time and was not good for the sports people of Ireland and divided sports people in Waterford when you had to be a GAA or a soccer player but not be able to play both at a good level.His hero was Stanley Matthews, the great England soccer legend from Blackpool back in the fifties.Tommy loved soccer so much that he gave boots to poorer children in a charitable gesture not telling his family.
Tommy is survived by his wife of over 60 years Madge and his daughters Michele, Sheila and Tara and one son, plus 13 grandchildren, many of whom came to Ireland for the funeral travelling via Toronto to Dublin and Waterford. He was aged 27 when he went with his wife to the USA. Some of his ashes are now in Tramore Bay, the remainder will be held by the family to be buried in a future time.Madge joked about which half will be buried with her.They were lifelong partners and raised a close-knit family with many grandchildren. They all showed great devotion and a great example of a strong Waterford familyWhen the book is ready they hope to do a reading and launch in the Book Centre Waterford in the coming year, all going well. One of the stories they told was of him jumping off the Red Iron bridge in the city for a swim and he once jumped in to save a dog that fell off the bridge and succeeded.
The family have thanked the people of Waterford and Tramore who have been so kind to them in their grief in the past week.