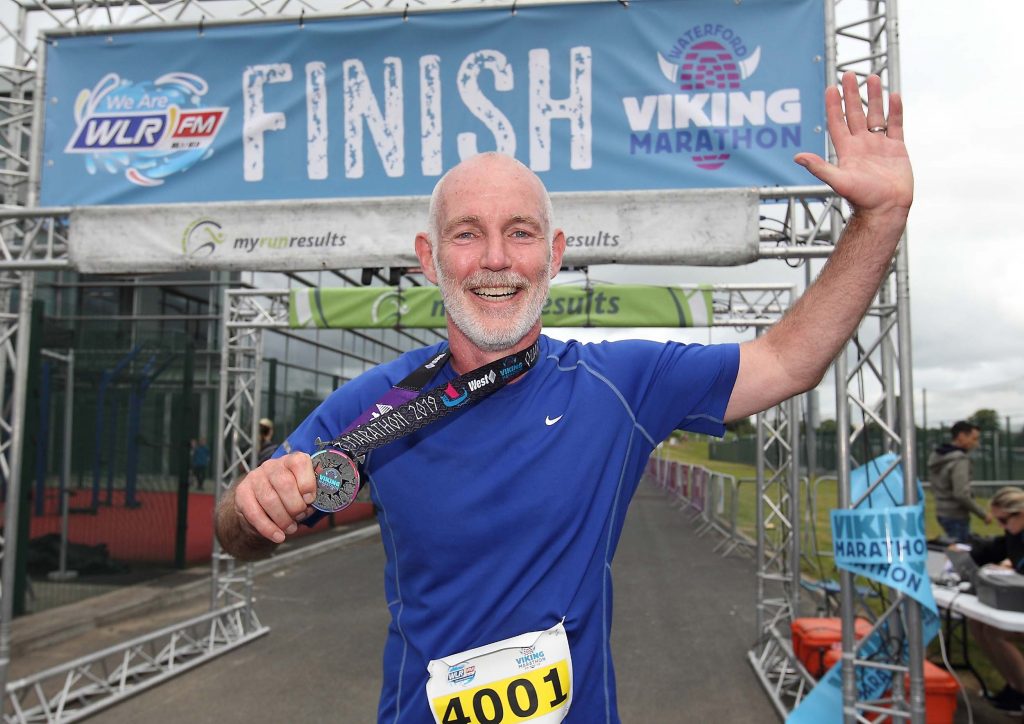 IT WAS an early start on Saturday morning last for the thousands of runners, walkers, family members and friends who descended on Waterford city for the eighth running of the WLR FM Waterford Viking Marathon.
There was a brilliant atmosphere and a great buzz as those participating in the Marathon assembled in the heart of the Viking Triangle for the 9am start. Visitors came from all over Europe and from as far away as Australia, Chile and the United States for this annual Marathon which has grown in popularity and stature since its inception in 2012.
The inclusion of the half and quarter Marathon in recent years along with the relay event has increased the popularity of the Waterford Marathon, allowing many athletes to participate who might not otherwise do so.
A Marathon the size of the WLRFM Waterford Viking Marathon does not happen by accident. It takes many, many months of planning and organising and it’s safe to assume that following on from last Saturday’s hugely successful event, the planning for 2020 has already started.
Happily the weather Gods smiled on Saturday’s Marathon. Gone was the oppressive heat of June 2018 that forced the cancellation of the full Marathon, to be replaced with a warm, dry but partly cloudy morning, in fact ideal conditions for the runners and walkers. Aleaxander Wallace, who runs with Saint Cocas AC in Kilock, Co Kildare, was the overall winners in two hours, 28 minutes and 51 seconds while Sarah Baryga from Slí Cualann AC, Greystones, Co Wicklow was the first woman over the line in two hours, fifty nine minutes and forty four seconds. The half Marathon winners were Yerod Derese, an Ethiopian running with Carrick Aces, Carrickmacross Co Monaghan in sixty four minutes and fifty six seconds and the holder of the women’s title, Ruth Fitzgerald (Waterford) retained her title in style in eighty one minutes, twenty nine seconds, two minutes faster than last year.
The quarter Marathon winners were David Mansfield from Clonmel AC won the quarter-Marathon in thirty eight minutes and ten seconds while Mollie Hutchinson from Ferrybank AC won the women’s quarter-Marathon in forty eight minutes and 28 seconds. Blarney’s Gerry Forde was the wheelchair winner while a team called BVSC were the relay winners. The wheelchair winner was Gerry Forde (Blarney) and the relay team that won was called BVSC. In truth though everyone who participated in last Saturday’s Marathon were winners especially those who traipsed over the finishing line, exhausted but satisfied, many hours after the race winners were long gone home.
Almost 3,000 runners and walkers participated on a course that took in two bridges and of course the Waterford Greenway, which was unsurprisingly hugely lauded by many first time visitors.
It was a special day for West Waterford’s Ted O’Leary who had a special celebration waiting for him on the finish line as he completed his 100th Marathon.There were some special moments at the finish line at the WIT Arena where many family members and friends clapped and roared in appreciation at the achievements of their loved ones.Ruairi O’Brien received a special welcome from his sons Jamie and Sam who ran to the finishing line to meet their Dad
Javier Garduno looked delighted as he crossed the finishing line with his son Santiago while Leslie Ann Cunningham had a big wave for the photographers as she crossed the line with Jack.
Bernard and Anita Beatty from Waterford were one of many couples that crossed the line hand in hand, thrilled that the months of preparation and training had paid off. So, all around a huge success was the overwhelming consensus for most who took part, be it organising, running, stewarding or supporting. An impressive 350 helpers lined the route, with marshals, water stations and medical personnel ensuring the safe return of all runners to WIT Arena.A memorable event created not only by the heroics of the participants but by a sense of Waterford taking the 2019 Waterford Viking Marathon to its heart.
Roll on 2020!