'We want to add value to our own product' 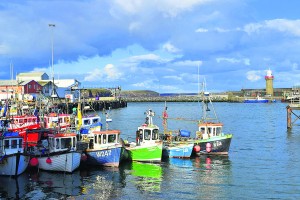 While the dredging of Dunmore Harbour, the installation of the new pontoon and the reintroduction of an operational syncrolift are all welcome and recent developments, residents are keen to see the harbour area put to greater commercial use.
Speaking to The Munster Express, Dunmore East Fisheries Local Action Group (FLAG) Chairperson Trudy McIntyre said the “excellent relationship” between fishermen and Harbour Master Harry McLoughlin also boded well for future developments within the harbour.
“We are looking to create added value for our fishermen: that is our primary objective,” she said.
“But there are certain mechanisms that need to be triggered, matters which are outside of our direct control which we cannot directly influence. To put it mildly: there’s a lot of red tape we’re going to have to wade through to make things happen here the way we would like them to.
“There’s a huge willingness locally to get start-up businesses into properties within the harbour, with a vibrant processing facility being a key part of our vision for the harbour.”
According to local resident and City & County Councillor Jim Griffin (SF): “We’ve seen several positive steps made over the past year to 18 months, and that has to be acknowledged. To have the syncrolift working again, for example, which means local boats no longer need to go to New Ross for repairs and other works, is very welcome: that in itself in generating work and more activity in the harbour, which is exactly what everyone involved in the FLAG wants to see coming about.”
Cllr Griffin added: “We’d like to be able to develop small to medium-sized enterprises in some of the properties within the harbour itself, some of which have been lying idle for several years. I’ve a product of my own called Irish Coast Seaweed – it’s natural, locally sourced dillisk/dulse; it’s a healthy superfood and it’s something I’ve been working on over the years as a hobby more than anything until I got to a point where I felt I might try and give this as a go as a cottage industry, and I’d like to acknowledge the support of my colleague, Councillor Eddie Mulligan (FF), in promoting both the product and, more importantly, the prospect of developing a SME/incubation centre within the harbour.
“We’ve seen how well initiatives like the Fumbally Exchange have developed in the city, and we only have to look at the success of Dunhill Ecopark to see what can be achieved in rural areas when it comes to developing and supporting SMEs. And I know there’s a willingness to make something like this work in Dunmore East.”
Ms McIntyre said that products such as Cllr Griffin’s should, in time, be marked with a distinctive Dunmore East brand. “We’ve seen how well the ‘place apart’ brand has worked for West Cork; there’s no reason why we couldn’t have a distinctive brand for Dunmore East. Given the development of our own food festival here over the years, as well as similar events in the city (Harvest) and in Dungarvan, it would be fantastic to showcase Dunmore produce, complete with its own branding.
“We ought to be doing this with our oysters, our herring – all the more so if we were processing this product within the harbour, from where we could be locally supplying both the French and Chinese markets for example, and we could develop something very well here with the requisite supports in place from central government.”
She continued: “That we still have oysters going from here to Holland, taken from our waters without being purified here, and sold to China from there, without us adding local value to what is our product, just doesn’t make any sense on any level.”
Jim Griffin said: “This is all about adding value to the local catch. And there’s no doubt whatsoever that we can do this in Dunmore East. But what we need now is some help from central government to make this happen.”