Home » All Front Page News » "We've been Through Hell"

"We've been Through Hell"

Mount Suir Residents on a Decade of Frustration
RESIDENTS in a city estate, who say they have “been through hell”, have expressed shock that a development company with links to the developer of their homes has been granted a contract to construct social housing in Waterford. For a decade, homeowners in Mount Suir, Gracedieu, which was developed by the Wexford based William Neville & Sons, say they have been dealing with a range of issues as a result of questionably built properties on an estate which remains unfinished.
Issues have included large cracks in walls and window frames, inadequate fire protection, poor sewage facilities, cracked window sills, gas fires of poor quality deemed unsafe by Bord Gáis, and a lack of estate maintenance. 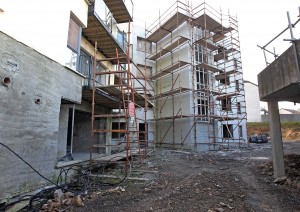 Scaffolding has been in place at Mount Suir for years.

Now, some residents have expressed annoyance that Liam Neville Developments (a different company), also based in Wexford, is set to construct housing units on a site on the Airport Road which was formerly occupied by The Salvage Shop.
The Department of Housing, Planning and Local Government has allocated €5 million for the development and, under the terms agreed, Liam Neville Developments (which, we would like to emphasise, is a different company) will construct 33 units on the site comprised of five one-bed houses, 13 two-bed houses and 15 three-bed houses.
Residents in Mount Suir who spoke to The Munster Express say the Gracedieu/Carrickphierish area was supposed to be an attractive suburban area of Waterford City but they feel neglected and say they have lived through a nightmare.
Instead of a bustling area complete with shops, idyllic homes, playgrounds and green open spaces, residents in Mount Suir say they are dealing with the fallout from a lack of services and properties which they claim are defectively built. “It was meant to be another Dunmore Road area,” said resident Linda Fowler.
Linda and her husband Arthur successfully brought a case through arbitration which required Nevilles to make their house fire compliant and to fix defective workmanship.
Prior to this, they had hired engineers J Burke & Associates Ltd to carry out an inspection to determine if there had been defective workmanship on their house.
In a letter to the Fowlers, the engineers said they had witnessed questionable workmanship in relation to a number of areas.
Reference was made to the frustrations which the Fowlers had endured as a result of the issues which had arisen.
Another resident, Jamie O’Rourke, told The Munster Express about the anxiety he felt and the sleepless nights he suffered as a result of the issues he had to deal with in his house including significant sewage problems.
“I saw men and women breaking down at meetings. People were absolutely devastated,” he said.
“We were being told there was nothing wrong with our house. We were told we were seeing things and that the cracks in our house were ‘settling cracks’.”
Jamie attempted to follow the same process as the Fowlers and obtained a credit union loan to engage the services of an engineer who, according to Jamie, couldn’t believe the condition of the house.
However, Jamie could go no further with the process because of the high costs involved. “We couldn’t go any further. I had no more money to give,” he said.
Liability was eventually admitted and rectification work was carried out on Jamie’s home. Jamie moved to his mother’s house nearby for two weeks with his family while remedial work was taking place.