Home » All Front Page News » "Who Knew What and When?

"Who Knew What and When?

One by one on Thursday evening last, the 32 members of Waterford City & County Council, joined by the Council Executive and media in attendance, rose to applaud and salute Colin Power, Paul Walsh and Jason Clancy. There has surely never before been a local authority meeting held like it in this city and county given its tone, content and emotion.
And one would also hope that a similarly worded motion will never again be brought before our local authority and that the message delivered by both Waterford and Wexford Councils last week, offering unanimous support of Bill Kenneally’s victims, will echo loudly in the Department of Justice. 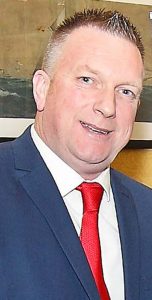 Cllr Declan Clune, who tabled the motion on the Kenneally Commission of Inquiry at last Thursday's Plenary Meeting of Waterford City & County Council.

The motion brought to Council by Cllr Declan Clune (SF) and seconded by Cllr Mary Roche (Ind) read: “That Waterford City & County Council calls on the Minister for Justice, Mr Charlie Flanagan, to commence without further delay the Commission of Investigation into the alleged cover up of sex crimes by paedophile Bill Kenneally.” The gravity of the motion in question also saw it discussed as the opening juncture of last Thursday’s Plenary meeting in Dungarvan, a courtesy which was the very least the three victims sitting in the public gallery deserved.
And for 43 minutes, local governance as we know it ground to a halt, as Councillor after Councillor spoke to support not just the three men sitting the public gallery, and not just the victims of Bill Kenneally, but of young Waterfordians who will hopefully retain their innocence in a safer society well beyond 2018.
Cllr Clune said the motion “was about justice for the survivors of the systematic torture and sexual abuse carried out by convicted paedophile, Bill Kenneally”.
He referred to Jason Clancy’s 2012 online discovery which revealed that Kenneally was involved in juvenile basketball coaching in Waterford. “Jason made a statement to the Gardaí which resulted in the conviction of Kenneally I February 2016 and a sentence of 14 years which Kenneally is now appealing.”
An extract of Jason Clancy’s Victim Impact Statement was also read onto the Council record by Cllr Clune. It stated: “A few weeks after my 14th birthday, the sexual abuse started. In retaliation for a Halloween prank played on Bill Kenneally, he invited me to his house one evening when his parents were away. When I got inside the house, I was told to go the bedroom where I was stripped, made to wear white shorts, blindfolded and handcuffed and abused. When the sexual abuse was finished, he squeezed my testicles to make me smile and photographed me with his Polaroid camera, which printed a photograph instantly. I remember how he waved the photo in my face, telling me if I told anyone, he had the pictures to show I enjoyed it. He repeatedly told me throughout his years of abuse that he was part of the Kenneally political family and that I would never be believed.”
For more on this story see this week’s print edition of The Munster Express newspaper