Home » All Front Page News » ‘WIPED OUT IN SECONDS’

‘WIPED OUT IN SECONDS’

Rathgormack farming family face an uncertain future following landsline
A landslide triggered by the December rains and exacerbated by Storm Frank has left a County Waterford farming family facing huge uncertainty over how they can salvage their livelihood.
Martin and Anna Dunne, of Churchtown, Rathgormack (situated on the back road between Carrick-on-Suir and Clonmel) showed The Munster Express the extent of the damage inflicted upon their farm on Sunday morning. It made for a dumbfounding sight. 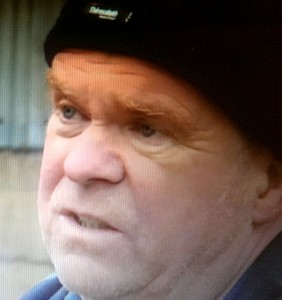 No farm in Waterford has been hit with anything like this biblical movement of earth in living memory – and one suspects it would take a significant trawl through the history books to find a local farm engulfed by such a colossal movement of soil, tree and root.
To the rear of their home and farmyard, a scar of earth, extending to 100 yards or more, unleashed enormous devastation, with (surely) thousands of tonnes of displaced ground having collapsed from the Coillte forestry which flanks the rear of their property.
Part of the woodland grounds that gave way previously formed a path above the Dunnes’ property – but that now lies heaped to the rear of a shed which, in normal circumstances, would be housing their 60-strong cattle herd.
But the cattle cannot be kept here at present, and may not return for some time given the mix of soil, silage and slurry that now sits several feet deep in the Dunnes’ farmyard. As Martin noted: “It could be months before we’re in a position to move anything here.”
Signs of something untoward developing first manifested itself on the morning of Wednesday, December 30th; hours after the worst of Storm Frank had been endured – at least for most of us, that is.
“It began in the farmyard that morning and then in the evening time, we had a further landslide down here into the back garden,” said Michael, showing me the trail of devastation unleashed by the appalling weather.
“But as the day progressed, it got worse and worse and between half three and four o’clock, that’s when we got the big burst of stuff coming down. We could see it coming down and there was nothing we could do about it – it came up to the patio door – luckily no-one was outside; it was too wet and miserable for any of our five (children between the ages of 11 and 19) to be out, and however bad it was behind the house, up in the yard…well, you’ll see for yourself now in a minute.”
The scene, which many readers may well have seen in Damien Tiernan’s RTE News report on Saturday last, really has to be seen at first hand to fully take in the extent of the damage and the levels of mud and sludge that now engulfs much of the yard.
“We had a massive amount of water flowing down through the yard and out onto the road for eight days solid,” Michael added, under a blue sky, with Slievenamon, across the River Suir capped in snow for the first time this winter. “And yesterday (Saturday) was the first day it stopped.”
The “big burst of stuff”, as Michael put it, came when he had moved his livestock (indoors for the past two and a half months) out of the shed and into the yard, as wrapped bales of silage were powered forward dozens of feet from where they’d been stacked. 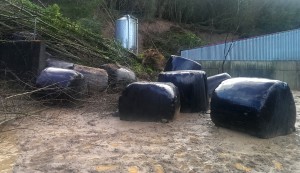 Bales of silage, driven into the Dunnes' farmyard by the December 30th landslide

“You can imagine the heat and the comfort they had inside, and for those animals to come out into that was a massive shock to the system; they were out for 24 hours and then we had them moved to temporary accommodation – how temporary right now, we just don’t know.”
Where to start? “It’s impossible to know, or what to do,” Michael replied, who explained that the floor of the shed was submerged in mud, while the slatted tank inside it “was full of stones, clay, water, slurry – everything mixed – and it’s a headache trying to figure out what to do with it. It’s impossible to stir any of that at the moment. If you go to remove any of the material that’s there, the amount of stuff that’s behind it that could move down again – and you’re talking about thousands of tonnes of soil.”
Standing amongst the sludge is a stainless steel silo which Michael had filled just 24 hours before the landslide. “There’s €1500 worth of feed in there and I can’t get into it.”
And to our backs at the front of the yard as we spoke was the Dunnes’ ancestral home, which Michael believes was saved by the eight-foot high wall situated in the upper part of the currently off-limits yard. 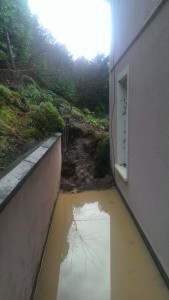 The bank over the Dunnes' back garden, which partly collapsed during the landslide.

“That wall withheld the landslide, everything came across at an angle, and only for the wall, it the mud would have come down past us here and probably taken out the house there, that’s been in my family for four to five generations at this stage. My mother’s parents lived in it, and 1877 is up on the (farm) house there. My Dad was 90 when he died three years ago, so you’re talking about 150 years, and in all his life he’d never have seen anything like what we’re looking at now…what happened here wiped us out in seconds.”
At that point in the conversation, Anna Dunne emerged from the home for a chat, in a week in which many visitors from far and near have witnessed the apocalyptic scene.
“Everyone has been so helpful, be it the neighbours around, the farmers around; there’s people texting and ringing, seeing do we want food, food for the animals, transport for them, they’ve been great. And we’ve had several public representatives calling into us, Seanie Power, Paudie Coffey, Tom Hayes, the IFA, the Farmers’ Journal, Mattie McGrath, Mary Butler – anybody who’s tried to point us in the right direction has been in touch with us and we’re very grateful for that…we’d nine or 10 lads helping us when the cattle needed to be moved on the Thursday morning.”
Michael added: “If you haven’t a neighbour in this life, you’ve nothing. Nothing.” Coillte engineers have also been on site and are conducting a report into the landslide, with staff having already dug a trench above the Dunnes’ property to divert further water away from the house and across the road into a field.
Anna continued: “We don’t know what’s going to happen if the weather deteriorates again. Everything is very fragile at the moment – there’s one bank at the back of the house that we’re watching all the time, and we know it could have been worse – some one of us could have been out the back or up in the yard at the time; it could have been at night time, the cattle could have got even more agitated and broken out and hurt themselves, a lot of them lie down and they could have been submerged in the mud. They’re heavy animals that’d be going straight to the factory so we know it could have been worse…but right now, there’s an awful lot of stuff still up in the air.”
As things stand, the Dunnes have no income for months, with IFA financial assistance covering feedstuffs only. “It’s totally inadequate, but that’s where we’re at,” said Michael.
Anna added: “The animals are housed and they’re being fed, but it’s when it comes to next year and they have to go back in again, is the same thing going to happen again next year if the weather is bad again? And they’re in there every winter, out of the fields and into the shed.”
Michael interjected: “My father built that shed when I was a boy, it’s there 50 years, I remember it being built. When my Dad came here, the land was wild.” He paused, adding: “And if he came back and saw it now…”