The President of Waterford Institute of Technology (WIT) has warned about the dangers of negative commentary emanating from Waterford city both in relation to the Technological University (TU) application process and the future of the city itself. “Negativity begets negativity,” Professor Willie Donnelly told The Munster Express in his Cork Road campus office on Wednesday last.
“Unfortunately, when you have people who tend to opt for criticism, saying that things aren’t going to work, it’s almost as if those same people are waiting for failure and that is a problem, I feel. But in general, I find that Waterford people are very proud of their city. Just mention the Waterford hurling team and you’ll almost automatically get a positive reply and an undeniable and real sense of pride about the team. So how are we going to translate that same sense of pride into other spheres, such as our biopharma industry, the ICT industry and all the great opportunities that have arisen from these and other industries.” 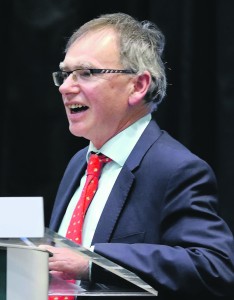 Prof Donnelly is thinking big for both the city and region

Prof Donnelly explained: “When I first came to WIT, all of our graduates in ICT and Engineering left the city, the county and the region. There were simply no jobs in both sectors at the time here. What we referred to as an ICT industry at that time was somebody selling computers, and just consider the transformation we have had in ICT in the interim. Sun Life recently marked its 20th anniversary in Waterford. Sixty-five (65) per cent of all its staff have graduated from WIT and that’s a great example of the impact and the innovation that’s in our institute. It’s something we are justly and deservedly proud of. In addition to this, with Sun Life, we developed a programme for their Waterford operation and it’s been so successful that that programme is now being developed in Boston and that’s huge, that’s an example of the level of innovation and creativity that’s in this institute. It shows what WIT is capable of.”
Regarding future capabilities, the question of where the Headquarters of the proposed Technological University of the South East (TUSE) would be located has exercised other column inchers and some of our city-based Councillors. On this particular matter, Prof Donnelly said: “Well, look, as everybody knows, this process (with IT Carlow) fell apart previously. I was part of it. I’m not going to go into why it did, but it did. That’s it. What we decided this time was that we were going to focus in on delivering the University, and the governance structure would be left until further down the line. What is important to me is the leadership that Waterford can bring to the table, and of course what Carlow can bring to the table. When you look at our research and innovation levels, our engagement with industry, the creation of Crystal Valley Tech, which is not just about Waterford, it’s a regional entity, we are stacking up well across a range of fronts, in my view. I am not going to get into that (HQ) argument or discussion at the moment as I feel we need to focus on the bigger prize. But what I would say, and maybe this is what ought to be given consideration when it comes to where we are going, because I feel this is a very exciting time for Waterford and where we’re going in terms of what I would see as the ‘new Waterford’. As identified in our (recently published) institutional strategy, our vision is to be in the top 100 new universities worldwide…and we want Waterford to be one of the best small digital cities in Europe and that’s an aspiration that we should have. This would build on our strengths.
And there’s also a recognition now globally when you look at economic, social and cultural development in terms of what’s now referred to as ‘sustainable cities’. Regions are driven by these centres of critical mass and what I really like about the National Planning Framework (NPF) is that it recognises the South East as a city region so that’s a lot of responsibility on Waterford, to be the driver for the region. This city is being entrusted to provide leadership to the region and as part of that drive, the University will be a combination of what we in WIT will bring to the table, in addition to what IT Carlow will bring to the table so how we maximise our respective strengths for the benefit of the region, that’s what’s important. And I also made this point when I was in with the City Council a while ago now: I said that if you want a region to look at Waterford as the city of the region the same way as the South West looks at Cork (city) and the way that Clare, North Kerry and County Limerick looks at Limerick (city), then we in Waterford city have got to show that same level of leadership when it comes to the South East. And this brings me back to this negativity, the talk of people fighting among themselves or people looking for opportunities to criticise or whatever or who do a lot of navel gazing, we need to get beyond that because this is a fantastic city.”
Prof Donnelly continued: “Let’s consider the city’s capabilities in critical mass terms, and take the (WIT) Arena as a prime example since it’s been opened. It’s a fantastic success story. The South East House and Home Show was on there last weekend (a reminder that this interview was conducted on Wednesday last), the Amplitude conference is on there today and ‘Toys 4 Engineers’ will be held there next Wednesday. The Arena is a catalyst for the region, the scale of the facility has been designed with the region in mind so rather than focus in on the (TUSE) headquarters for now, let’s focus on the role of Waterford as a regional leader. Maybe we need to think a little bigger, but it starts by having pride in ourselves in what we’ve already achieved and what we can aspire to achieve because I’ve seen what we’ve achieved already, and we’ve made enormous strides forward.”