Strategic Plan targets top 100 Young Universities ranking
The Technological University of the South East (TUSE) aims to be within the world’s top 100 ‘Young Universities’ by 2030: that’s one of the myriad of objectives detailed in WIT’s Draft Strategic Plan (2018-2021). In the draft dated January 30th, the document’s introduction contends that the merged TU WIT is working to form with IT Carlow “will have the quality, scale, breadth of programme and disciplinary provision and depth of research to rival existing ‘young’ universities in Ireland and elsewhere”.
“Our goal is to be in the top one hundred Young Universities, demonstrating quality and excellence in all our activities,” the draft declares. 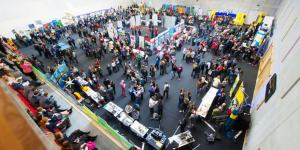 The frenzy and excitement of WIT's Open Day.

The ambitious, upbeat plan states that the new entity will have an “outward-looking” international sensibility while also seeking to address “the skills needs of regional employers as well as the needs of the unemployed in the region”. If initiated, the TUSE aims to “enhance impact in terms of improved quality of life, enhanced employment opportunities, more stimulating cultural activities, and a more equal, just and diverse social environment for the region’s population and for Ireland as a whole”.
Referring to its regional leadership role, the document states that WIT, and in turn the TUSE “needs to continue to present an attractive educational proposition to prospective students, both school leavers and others”.
“This is vital to retain talent within the South-East region and to attract talent from outside, including from abroad. We need to ensure the relevance of our curriculum not simply to regional need but the demands likely to be made on twenty-first century global citizens.”
As an lobbying advocate for the region, the document identifies the need for WIT to become “the voice of the region in public discourse, must advocate for the city and region in the public domain, and become a credible source of regional intelligence.” Key to this is the creation of a “high-quality, internationally-recognised university” which the draft plan identifies as the “single most transformational initiative for the region”.
Among the 10 actions WIT identifies in furthering these objectives are:
* A commitment to extend WIT’s “public presence across the region and our outreach in counties and centres of population by hosting at least three public events in Tipperary, Wexford, Kilkenny and Carlow in addition to Waterford”.
* To “plot graduate output in terms of regional skills needs and take corrective action where there is misalignment”.
* To “extend our presence in the community sector through work placement options, staff involvement and Continuing Professional Development (CPD) for community groups with evidence of at least one activity in the domain in each School” and
* To “contribute to and lead on regional policy initiatives relating to economic, social and cultural development of the South East by publishing policy ‘green’ papers (at least three per year).”
The draft plan identifies 44 actions, including a 25 per cent budget increase in further training in teaching, learning and assessment and to review “the allocation of space and develop a capital plan to align with future needs”.
All observations on the draft were presented to the Strategy Committee of WIT’s Governing Body on Friday last, February 9th and it’s believed that the final version of the Strategic Plan will be brought before the Governing Body on Tuesday next, February 20th.