Colin McCarthy pictured with the Men's Plate at the recent Street League World Cup in Glasgow. He's also pictured with his team (front and centre). 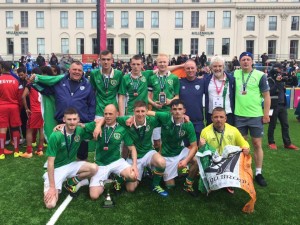 Colin McCarthy was part of the Irish team which won the prestigious Men’s Plate at the recent Street League World Cup in Glasgow.
Irish Street League uses the power of sport to transform the lives of individuals who may have encountered difficulties and fallen on hard times.
Thanks to support from Aiseiri and Treo Port Láirge, Colin was selected for the Irish team to participate in the World Cup after impressing in his trials.
Colin enjoyed the opportunity to meet players from different countries at the World Cup and thoroughly enjoyed every part of his experience.
“When we met in Dublin before we left for Glasgow, we walked into our hotel room and the room was decked out with Irish colours. It was a great feeling to see that even before we left for the World Cup and the support we received was incredible,” he said.
Colin said the stories of some of the players from different countries made him even more appreciative of his own circumstances.
“I got my life sorted out and I have family and professional support. Some have nothing to go back to,” he said.
Colin is now going to sign with local club St Joseph’s FC and has been in contact with the FAI regarding coaching and referee courses.
And it’s hoped that the successful Men’s Plate winning Irish team will participate in the Home Nations tournament in Belfast in September.
“I never thought I would reach this level. It’s always been a goal of mine but I didn’t think I would reach it,” said Colin.
He thanked Aiseiri and Treo Port Láirge for giving him the opportunity to participate in the World Cup and for the support he has received.
He also thanked the FAI in Waterford for the support he has received since he returned from the tournament.
Danny Murphy of Treo Port Láirge said everyone back in Waterford closely followed Colin’s progress online.
He says there are a number of local players who are capable of making next year’s panel.
“It’s a reward for the changes that the lads have made in their lives and it’s a great moral boost for them,” he said.
Treo Port Láirge is located in Lacken Road Business Park and aims to encourage and support young people between the ages of 16 to 23 to make more positive choices and move forward with their lives.
Teams representing 52 countries competed in the World Cup.
Ireland overcame Egypt after one round of penalties following a 4-4 draw, which ensured they ended the tournament without losing a single game and captured the Men’s Plate.
Mexico were crowned the overall winners of the tournament.