A segment of a steel girder retrieved from the site of New York’s World Trade Centre (WTC) was officially unveiled at a midday ceremony held at the Bishop’s Palace garden on Sunday last.
The new September 11th memorial was the brainchild of crystal cutter and master engraver Sean Egan, whose work has seen him establish close ties with the New York City Fire Department (FDNY), which lost 343 members during the 2001 terrorist attack on the WTC in Lower Manhattan.
Speaking to The Munster Express following the ceremony, Mr Egan was justly proud of the memorial for which he designed the crystal base upon which the girder now sits.
“For me this is a project which has been 17 years in the making, since 9/11 happened,” he said. “I wanted to honour those who lost their lives that day by getting a piece of steel from the World Trade Centre and bringing it to Waterford. To be honest, I never thought it would happen, everything that remained of both those buildings following the attack was considered sacred so I was delighted when I got the opportunity to make this happen two and a half years ago when I was in the US to present a piece I’d been commissioned to make as a memorial to those killed at the (2013) Boston Marathon.” 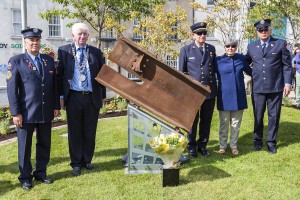 Sean Egan added: “During the ceremony that day, I made an off the cuff remark to a friend of mine – a firefighter – about the chances of getting a piece of the World Trade Centre for a memorial in Waterford and he said he’d see what he could do. Within two weeks, he wrote to me and said he had a piece for me. I couldn’t believe it. So once I had the piece then I wondered what exactly I’d do with it, I couldn’t believe how big it was. So it was shipped here within six months of that – we’ve had it here for about two years – and the reason there was such a delay in getting it put up is that we wondered where would be the most suitable place to put it – none of us really expected to get it. A few locations were considered before it was decided to install it here outside the Bishop’s Palace, and for me, it feels like a very appropriate area for a memorial like this. I’m delighted it’s here. It took a lot of time and a lot of people to make this happen but then within the past week or two, it’s gone up and now it’s unveiled and I’m very proud to have that piece here in Waterford. We really didn’t expect a crowd like this to turn out today, in particular all the uniformed personnel because it’s really all about them. I’m delighted with this, thrilled to be honest. It’s a very good day for me, personally.”
Addressing the gathering, Ralph Ingenierie, the former Chief of the Fire Service at Mount Cisco, New York, said he and his wife Rosemary were honoured to attend Sunday’s event, where he passed on the best wishes of Chief Robert Moran, a 9/11 first responder whom Sean Egan met in Boston in 2016. 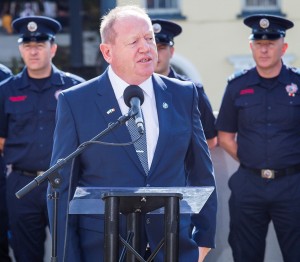 Chief and Mrs Ingenierie first met Sean Egan while visiting Waterford during their 50th wedding anniversary after a city tour guide suggested they should pay Sean a visit “if they wanted to see a real craftsman and you are (looking at Sean): God bless you and your hands.” It just so happened that Sean was then working on a piece for which he won widespread acclaim, ‘The Miracle Of Stairwell B’, a 9/11 sculpture he’d been commissioned to create by then US Ambassador to Ireland, Dan Rooney, to mark the 10th anniversary of the attack. Sean’s work, said Chief Ingenierie, “really honours the job that the first responders and rescue workers did that day to save so many people”. He added: “Our fire departments are so happy that you now have a place to come and reflect on the lives of the Irish lost that day along with the victims of the man other nations who lost citizens that day in New York, Washington and Pennsylvania.” Speaking at the unveiling, City & County Mayor Declan Doocey (FG) thanked “all who had made today possible – I am proud to be part of today’s ceremony”. Mayor Doocey, who found the event both touching and emotional, was joined by many of his Waterford City & County Council colleagues at the ceremony, including Metropolitan Mayor Joe Kelly (Ind). Rescue 117, the Search And Rescue helicopter, also performed a fly-over at the event, which was also attended by members of the city and county’s emergency services, along with the Defence Forces.