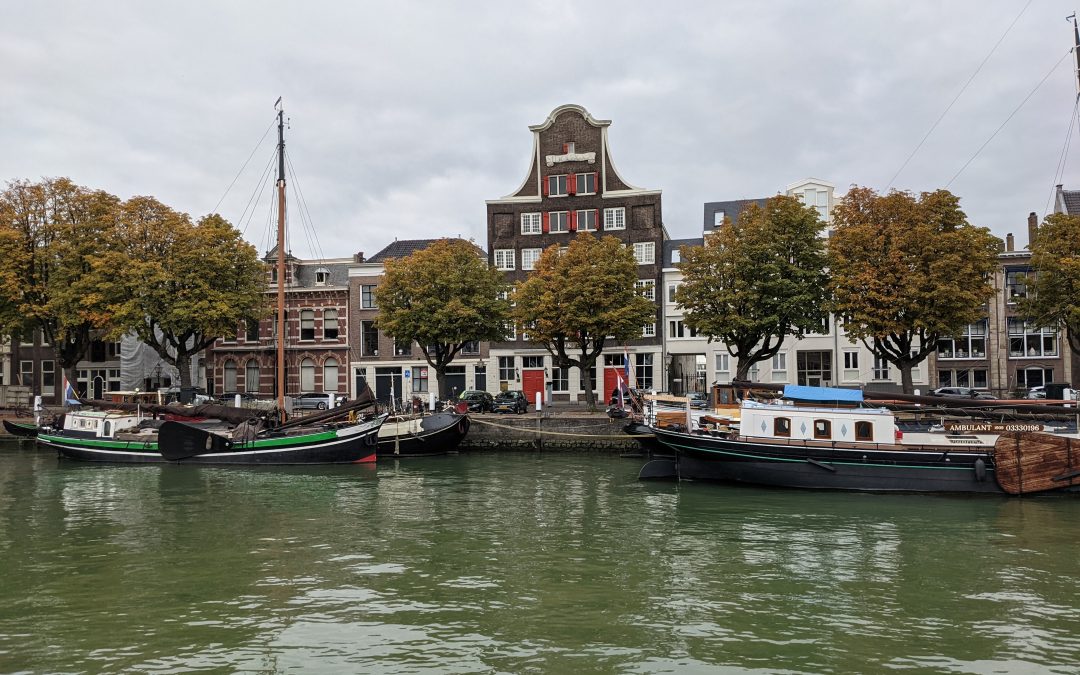 This is a beautiful and historic city, not far from Rotterdam. They claim it is the oldest city with a charter in Holland. Little war damage despite being an important port in the past, whereas Rotterdam was heavily bombed.

If you want a small version of Amsterdam with canals, history and art, then this is an alternative and lower in cost. Easy to do day trips from here and have a base, too with lower hotel costs.

We started with a walking tour with Pauli, a native of South Africa, followed by a pleasant boat trip along the canals into the old port, where you can see major shipping traffic heading for the Rhine and Germany. 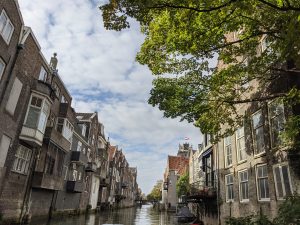 We finished at the excellent Dordrecht museum.

Waterford has made great progress in recent years with its tourism offering and Dordrecht has a great heritage also.

There is an old town, which looks very prosperous and suburbs, arriving by train it is about 15-minute walk to the old city. Check out the tourism office for detailed maps. Given the complexity it can be better than Google maps, noted our tech savvy son, who lives in Holland.

The town hall is very well restored and there is a great network of streets, where living in the old port and town is popular. This creates vibrancy, living over the shop is trendy here even if the rooms are smaller. The building heritage is strong and has the 8th most preservation orders in all of the country.  Some of the streets lean inwards and are kept up by steel wall anchors if renovations are undertaken.

The old port is turned into a marina for pleasure boats and is also a trendy place to live now for locals or commuters to Rotterdam just 20km away by train.

See some heritage boats too in the harbour, an old warehouse or two that dates back several hundred years, impressive churches and town walls also with their gates and coats of arms.

The city became Protestant after the reformation and the former St. Mary’s Catholic Cathedral became a Dutch Reformed Church, with all the statues taken out and paintings removed to be stored elsewhere. In other cities they were wantonly destroyed.

This was in the early 1500s after Martin Luther broke from the Catholic Church. Many Dutch also followed his new religion, but less support for it in South Holland.

The city would also lose out to Rotterdam from the 1700s after some great floods killed a huge number of citizens. Today they still worry about floods and our   guide told us that she can move to the attic if the flood sea waters rise to a level of 4 metres more than normal and be safe for a while. In 1953 over 1,850 died in a flood that affected all the country and a new Delta plan and defences were built.

Today you can see the great waterways of the links to the Rivers of the Maas and Rhine with cargo ships and barges going to Germany inland and towards the sea in the other direction.

This was a great trading city back in the day and wine was big business, like in Waterford, they had links to France. They have named a wine street in the port, where the buildings still have old wine cellars and signs for a Bordeaux house.

Important schools and churches are here too, some are converted now for modern use as religious belief falls.

We noted also an emerging trend in Holland for preloved things as part of an eco-trend. Vintage fashion has become very popular, plus old furniture and furnishings, household items and vinyl records are making a big comeback with 3 stores selling vinyls on the main shopping street, said a shop owner to us.  The city is nice and laid back with a good atmosphere.

We saw the famous burial place in the Augustine Church on Voorstraat of Aelbert Cuyp 1620-1691, world renowned artist from here, we would see his paintings later.  The city was also the location for the Dordrecht conference to settle the break away land of Holland after a long Battle with Spain in the 1500s.  The Spanish and Habsburgians would rule here, up to then. Later invaders would be the French and Napoleon after 1790 to 1815 and then the Nazis from 1940-45, so the city had its share of invaders.

The excellent boat tour at ten euro a head is good value for an hour, no English on the loudspeaker tannoy, but was still nice in cool fine autumn weather.

You get to see how people live overlooking the canals and old port.  Many of the houses are being renovated too as this is valuable real estate, although parking is a big challenge.

Nearby port of Rotterdam has many jobs and Dordrecht it a pleasant place to live.

Rotterdam suffered huge war damage 1940-45, but not Dordrecht, hence it is a magnet for tourists today.  They had invaders then but also the French in 1800 to 1814 under Napoleon.

The city has good places to eat also like the restaurant Magazijn on the main Voorstraat, great airy place with high ceilings and good ventilation, nice for fish and a variety of foods, served efficiently.

No mask wearing except on trains.

This is close to the canal water bus stop.

For local shoppers like in many Dutch towns there is a fish and food market, many immigrants and locals come here for good value and a chat with traders.

Many interesting individually owner local shops also. It took a while to get used to not wearing masks in shops. There is an old mint nearby, where back in the day, they made their own silver coins in the Middle Ages. Nice to potter about in record stores and see some old albums. We were told all age groups are in the market, looking for different types of music as well as the old classics.

The city is also a haven for artists and now until the end of March, you can see excellent art and lots of fine paintings From Albert Cuyp, as well as 18th century artists Turner, Gainsborough and Constable from England.

Dordrecht attracted artists from the 1700s and still does, Turner was here three times as he loved the light and technique of Cuyp who lived in Dordrecht in the 1600s, the English would love his paintings of countryside and cows with water in the background.

Sander Paarlberg, Curator of Dordrecht Museum gave us a tremendous tour of the special exhibition. He would be excellent on a TV show in Ireland or UK as his English is impeccable.

We also noted in the gallery the most expensive engraved antique glass from Germany worth €100,000 bought by the Dordrecht Museum, who seem to have good funding and also get great support in exchanges from other galleries in UK, USA, Belgium and France is a key success point and also rich donors allow their art works to be exhibited here, reducing their worries and insurance costs. Sander told us about the famous English artist, Turner, and how the city to this day is a haven for artists and we saw a few at work.  Cuyp did many paintings of animals and landscapes.

The bright yellows of the sunrises and the later evening colours are magnificent, as if some torches are being lit. it is also said that Cuyp also influenced the impressionists in the later 1800s, Van Gogh from Holland would have been an admirer noted Sander of the gallery. Saffron was another colour. Cuyp even painted UK images of London, even though he was never there. He also went to the coast but never left his native area.

There are wonderful nature scenes and also a great one of a secret in a gentry house, where a young servant girl sees some unusual flirtations going on.

Great paintings of horses pulling boats out of the sea water on the coast.  Cuyp also had a connection with Rembrandt and students of his came to Dordrecht. Some biblical art too like the denial of St. Peter.

We really admired the natural Dutch landscapes by him.

Religious art was sometimes destroyed after the Reformation but were stored in Dordrecht when a fury rose against the church and art extravagance in the period of the 1500s and 1600s over religion.

Like in Ireland it was a hard time for Catholics, but that would change in time in the 1700s.

We certainly learned a new angle of history from our Dutch visit and how religion had a divisive effect in Europe too.

Sander has written an excellent book on the exhibition, with not just the Cuyp but also other great Dutch artists like Rembrandt, but also English Turner, Constable and Gainsborough in this exhibition that goes on till end of March 2022.   The Dordrecht Museum, is just 10 minute walk from the Stadhuis or about 15-20 mins from the train station.

Go and see it and the medieval town, you will not be disappointed, it is easily reached by train, between Eindhoven and Rotterdam.

It can be an alternative to Amsterdam and is less crowded, but has great history also, see the big barges that go down to Rotterdam from the German Rhine or Maas rivers to Belgium.

You can sense how Europe is so integrated from trade and history, yet still not far from Ireland, 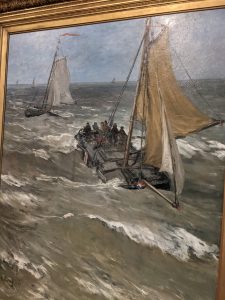 Aelbert Cuyp exhibition in Dordrecht museum, fishermen at sea with sail, about to land at beach in heavy weather, mid 1600s.