A century and a half caring for the city's eldery

The sense of peace and comfort at Saint Joseph’s Home, run by the Little Sisters of the Poor in Ferrybank, struck me as much as its impressive scale did during a recent visit. Sitting on the Waterford/Kilkenny boundary and boasting a magnificent view of the city’s South Quay, the custom-built facility, opened amidst the snow and ice of November 2010, drawing a veil on the Sisters’ 136-year presence on Manor Hill.
And in precious little time, historically speaking, the building has established itself as one of Ferrybank’s primary landmarks, overlooking the sea-bound waters of the Suir.
“It’s a wonderful building,” said Mother Roseline, who brought me on a tour of the €20 million development, the jewel in the crown of their 150-year-long association with Waterford. 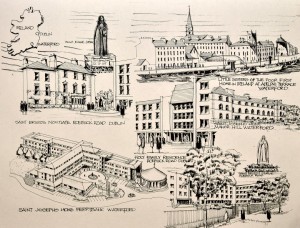 A sketch of where the Little Sisters of the Poor have been based in Ireland over the past 150 years, including the three different locations in Waterford it's called home since 1868.

“We’re very proud of what we’ve established here, what we offer to our residents and how we have integrated ourselves into the Ferrybank community. And of course, we are delighted to be among the generation from our order who are here, at this special time, to mark the 150th anniversary of the Little Sisters’ arrival in Waterford, who first arrived here from our ‘Mother House’ in La Tour in Brittany (France) on February 14th, 1868, when we established our first home for the elderly.”
Regarding the anniversary, Mother Roseline added: “We’re thanking God every day that we’ve arrived at such a significant milestone and we’re equally thankful to have been able to provide such a service to the elderly of Waterford and its environs over the past 150 years.”
When the order first arrived here, the Little Sisters’ presence was limited to two nuns, and they rented a building on Number 3, Adelphi Terrace, a since removed block upon which members of the famed Malcolsmon business family also lived.
Said Mother Roseline: “They lived there until, we suspect, the house simply wasn’t big enough but in the meantime, they began building a purpose-built home on Manor Hill (opposite Mount Sion School), a building most people in Waterford city would recognise or have some knowledge of.
The move across the Suir from Manor Hill was partly borne out of necessity, she added. “We really weren’t going to be able to comply with HIQA standards for too much longer on Manor Hill so we decided to rebuild and relocate, rather than move away from Waterford – that’s how much we love the Waterford people. We couldn’t be happier here in Ferrybank.”
Mother Roseline continued: “We began our 150th anniversary celebration back on February 14th, here in St Joseph’s, so as to give residents, Sisters, staff and volunteers a chance to celebrate here at home, prior to the major celebration held on April 13th and 14th, during which we were delighted to be joined by the new Bishop of Ossory, Dermot Farrell, who celebrated a special Mass in our honour, and in memory of all those who maintained and ran this service before us.”
At that Mass, Bishop Farrell acknowledged the order’s good and largely unheralded works, stating: “Your specific charism is to the elderly poor – not just to provide accommodation and food to them – but to bring every woman and man a certain quality of relationship, a presence, a closeness, and a quality of life and dignity which will draw the elderly poor out of their isolation and free them from fear and anxiety. It is a moment of grace easing the pain of loneliness, loss and the fear of being unwanted which is the most awful poverty. History will record that it is an invaluable service.”
The Little Sisters’ sole brief, be it in Waterford or the other 30 countries in which they are based, is to the care of the elderly.
“This is their home,” said Mother Roseline “and our residents themselves have made this their home. We strive to make sure that there is a real sense of home and family spirit here, in addition to a great sense of welcome to all who visit here, and I feel that this is also of great consolation to those who have loved ones or dear friends living here.” Much to my delight, when I briefly said hello to one of St Josephs’ residents, a hale and hearty man of 97, his son informed that he still reads all the local titles. “The ‘Munster,’ the ‘News’ and Waterford Today every week, he never misses them.” Long may that remain the case!
The good humour I experienced during my visit ran in tandem with the palpable level of warmth which permeates a building that also features a beautiful chapel and a fine dance/concert hall.
This is as much a village under one roof as it is a home away from home, and the tips picked up by the order having visited similar facilities across Ireland and Britain prior to construction in Ferrybank have clearly paid off. Mother Roseline told me: “We’ve got an internal street here, which includes a medical centre, a village shop, a team room, a library, a hairdressers, along with arts and crafts, a computer room for the residents, along with the chapel and village hall, where we have many activities and celebrations for the residents. Not only do we strive to provide comfort to our residents, but we also value the importance of independence for residents. They live in peace and contentment here – it’s a beautiful atmosphere.” A long-standing contributor to the welfare of Waterford’s elderly, the Little Sisters of the Poor have stayed the course on Suirside for a century and a half. They’ve clearly done the city some service.