A Health Campaign That Needs Oxygen

Eoghan Breathnach looked a picture of health when we met in Dungarvan on Tuesday last. “It’s my first week back at work (at Gaelscoil Thiobraid Árann in Tipperary Town) and the pupils are taking it easy on me,” the 37-year-old joked.
“Tadhg Ó hUallacháin, who’s from An Rinn like myself, is also working at the Gaelscoil and he’s been on driving duty this week, and that’s been a big help too – one less thing for me to be thinking about. But it’s been good to get back to some level of normality, buíochas le Dia.”
As we reported in last week’s edition, Eoghan sustained a serious injury while hurling for An
Rinn against (and in) Ballysaggart in a Junior Championship game on Easter Sunday (April 1st). 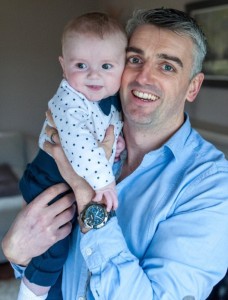 “It was a typical junior game in many ways, and the tackle that injured me was a typical junior challenge,” Eoghan told this columnist.
“I remember trying to clear a ball awkwardly, as any good junior hurler will do and I left myself very, very open – I was after over-stretching a bit. And a shoulder came in on my flank – I suppose I was blindsided by it. I was winded and I went down – I couldn’t really breathe. When you get winded, it generally doesn’t take that long to recover but the pain wasn’t easing off the way you’d have expected, and luckily for me and for my family, there was a lady on the sideline from Ballysaggart – Tina Maher, and Maire Ryan, both of whom I’m indebted to – and they had a poke around and in very little time at all, they knew I’d broken some ribs. Now I’d broken ribs before – it didn’t feel like the end of the world – but I was pretty sore.”
Eoghan continued: “So myself and the manager on the day, Tomás Ó Cadhla, we headed towards the car to go to a doctor to have a look at these ribs, but I only managed about 10 steps along the sideline when I collapsed. It turned out I had a severe lack of oxygen by then – I couldn’t breathe properly at all – and it turned out that not only had I broken three ribs, I was probably in shock by then, but I sustained a pneumothorax – a collapsed lung as it’s commonly known as – one of my broken upper ribs had punctured the lung…and it collapsed almost immediately, and fluid was already entering my lung by then.”
By then, Tomás had called for an ambulance while Tina Maher, Eoghan reckons, “thought something was deeply wrong with me at that stage (and) she put me into the recovery position, Billy Devine (a well-known local clubman and Godfather to Eoghan’s wife, Caroline) was supporting my back, and Tina was trying to clear my airway. I was struggling to breathe in through my nose and out through my mouth as she was asking me to do because, as I was later told, the nature of the fractures were interrupting my lung function. We were 15 minutes into all of this when she called her brother to go down the road to her mother’s house to collect an oxygen tank that her mother uses for medicinal purposes, and within 10 minutes of that, I was on the oxygen which kept me going until the ambulance came, which was 50 minutes after the call was made…and in my opinion, and in the opinion of people more qualified than me, that oxygen was a lifesaver.”
Following a 10-minute flight aboard the Athlone-based Air Corps 112 air ambulance (“I was singing songs during the flight after whatever they gave me!”), Eoghan was transferred to University Hospital Limerick, where he spent the following 10 days, complete with a tube in his chest (via the armpit), aiding his recovery.
In the interim, Eoghan’s focus hasn’t been solely devoted to his recovery, now that his eyes have been opened to the deficit in injury trauma assistance at the vast majority of sports venues not only in Waterford, but nationwide.
“Things need to change. Bringing out a water bottle for an injury was fine 20 years ago, and the vast majority of injuries at that time were soft tissue knocks whereas now I think things have evolved; players are bigger now and, younger lads are spending more time in the gym and are physically bigger than you and I were in our late teens/early 20s – that means bigger collisions during matches – and it also means that hospitals are dealing with more catastrophic sports injuries nowadays. And when players go into shock after an injury – not every injury is going to be on the scale of a collapsed lung, granted – but oxygen has many uses when it comes to treating an injury in those first few minutes.”
Said Eoghan: “Since my own experience, I’ve been looking into this in a bit of detail, and the Paramedic Support Service recognises that all seriously traumatised players with head injuries, chest injuries, unconsciousness and serious bleeding, should all be given high-flow oxygen as an initial on-field treatment since all these traumas affect the respiratory system.”
With that in mind, Eoghan hopes that the GAA can ensure that all of its clubs are fitted with a medically approved stretcher, neck brace and oxygen supply – and it’s a health policy which the FAI and IRFU should also adopt.
“The GAA could actually take a lead on this. Small five-litre canisters of oxygen with a facemask could be bought quite cheaply. After all, Croke Park is taking in plenty of money from gate receipts, the Sky deal and so on and we’re talking about a very small investment here on an issue which we as an Association, should make a proactive move on.” My sentiments exactly, Eoghan.