A Journey Into Cycling "Hell"

“‘Paris-Roubaix’ is cycling’s Cape Horn,’ said the double winner Marc Madiot – in other words – the ultimate challenge – adding that, ‘in an era of cycling by computer it sublimates the artists who use pen on paper. It’s as beautiful as a parchment manuscript.’ The race is anachronistic, but glorious.” – William Fotheringham (Sunday In Hell)
Writing a book about a sports documentary might seem like an odd box to tick, but it’s one that William Fotheringham is clearly tickled by, having added ‘Sunday In Hell’ to his considerable CV.
The book is a companion piece to ‘A Sunday In Hell’ (1976), an engrossing cinematic record of that year’s Paris-Roubaix, the one-day cycling classic which Waterford’s Sean Kelly subsequently won in 1984 and 1986.
The film, the brainchild of Danish director Jorgen Leth, was screened at Garter Lane Arts Centre as part of the Imagine Festival (take a bow, Ollie Breslin et al on a job superbly done) and made for revelatory viewing.
I must confess, and knowing what I know now having seen Leth’s film, I’m slightly embarrassed to declare that I’d not heard of ‘A Sunday In Hell’ until it was listed in this year’s festival programme. But the chance to see it locally and to hear William Fotheringham speak about both the film and his book afterwards with Frank Ryan was too good to miss. 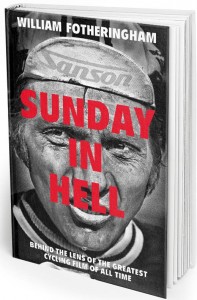 “I think the first time I saw it was when I was working for ‘Cycle Sport’ magazine some time in the early 90s,” said Fortheringham, “when we still used video cassettes!” A further screening of the film in Bristol “around 2011, 2012” persuaded Fotheringham that there was another narrative layer worth adding to Leth’s work, which is described on his book’s sleeve as “one of the best sports documentaries ever filmed”. Leth was invited to the screening, at which Fotheringham compered a post-screening Question and Answer session, by the end of which the Guardian and Observer writer realised he was onto something.
“And that was the point at which I realised there was a whole, massive backstory to the film involving Jorgen, along with the film’s protagonists (cyclists Roger De Vlaeminck, Freddy Maertens, Eddy Merckx, Francesco Moser and unlikely winner Marc Demeyer) and the race itself.” For his part, Leth was keen to create his own, self-styled cycling love letter. “I thought it was a fantastic sport, with great stories, and I felt it deserved better than lousy sports journalism,” he said in 2003, which Fotheringham quotes in his book. “It deserved to be sung about in big, epic films, and there were other ways of talking about it.”
Leth’s camerawork was to revolutionise the coverage of cycling as a televisual spectacle. He was the first to shoot cycling racing from a helicopter, an innovation anyone watching the sport nowadays probably takes for granted. Most viewers, as I was myself until recently, are presumably unaware of who initially green-lit the installation of a camera on a chopper as a means of capturing the peloton in all its high-speed glory. Added to this, screening an entire race like the 150-mile Paris-Roubaix (or a full stage of any Grand Tour) had not yet been established by the time Leth was filming: live TV coverage was restricted to the race’ final hour.
With 27 different cameras on the route, Leth and his crew also shot elements of race day which mass audiences had never consumed before: such as the riders registering, signing pre-race autographs for awed fans of all ages, followed by their pedalling towards the official start. To a bombastic score which chorally recites the name of the race repeatedly, Leth superbly weaves together the story of the ’76 event, the first time he had, at first hand, witnessed a race made (in) famous by its 20-plus cobbled sections.
It’s not for nothing that Paris-Roubaix is widely known as ‘The Hell Of The North’, having left so many of the world’s leading sprinters in bloody-limbed messes on the route’s often narrow roadside verges, lined with cycling mad spectators. And Leth captures it all, from above, alongside of, in front of and behind the peloton, as well as from the ‘broom wagon’ sweeping up the event’s stragglers and the Brooklyn team car (De Vlaeminck was their star rider at the time).
He also positioned a camera in the stunningly French titled Café de la Place in Valenciennes, which Fortheringham notes is home to “psychedelic wallpaper that would have been the dernier cri when the patron and madame slapped it on in a mid-1960s fit of optimism”. There’s a familiar tone to the café chat which doesn’t require knowledge of French to ascertain what’s going on, nor is translation necessary to determine which punter is keenest to widely share his opinion. It’s a compelling social vignette in a film which not only primarily addresses a much-loved sporting event, but captures so much of the human condition. As Fotheringham writes: “That contract with chance works in the most mysterious ways.”
Remarkably, the multiple films crews which shot ‘A Sunday In Hell’ were not in radio contact during the race itself due to the race organisers’ concern about potential interference with their own internal race radio system.
“This meant that Jorgen was, in a sense, blind for the day: he knew where he wanted his camera men to be, but the reality was that he had no way of controlling them and no idea of what they’d shot until well after the race was finished…so he got what he got and worked with what he got.” What Jorgen Leth ultimately got was remarkable: an unprecedented record of the beauty, cruelty and drama of Paris-Roubaix, “a film that puts pure adrenalin in the blood of the viewer”, according to one reviewer in 1977. William Fotheringham’s book of Leth’s movie makes for a worthy stablemate.