Home » Local News » A Night at the Opera

A Night at the Opera

The din of enthused patrons, crunching along the gravel path of Lismore Castle’s Upper Garden, illuminated by tiki torches under a clear night sky, provided the closing bars of an unforgettable midweek soundtrack.
Rossini’s ‘L’Italiana In Algeri’, the centrepiece of this year’s Blackwater Valley Opera Festival, had just concluded, having audibly won over both this columnist and the vast majority of the near 500-strong audience. And, as a first-time opera goer, I’d been completely bowled over.
Like a great many people of my age (clinging to their 30s!), my first experience of opera coincided with the most joyous sporting experience of my young life: the 1990 World Cup in Italy, when Jack Charlton’s Republic of Ireland made it all the way to the Quarter-Finals.
The BBC, which we then received thanks to the near impressionistic transmission provided by the Comeragh Mountain mast, had boldly selected Luciano Pavarotti’s rendition of Puccini’s aria, ‘Nessun Dorma’ as the title track for its coverage of the Finals.
Not only that, but a concert featuring Pavarotti, Jose Carreras and Placido Domingo was held against the backdrop of the Caracalla Baths in Rome on the eve of the (ultimately dreadful) Final between West Germany and Argentina. 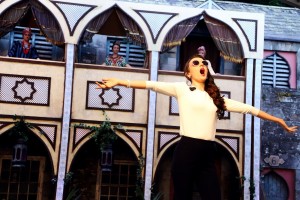 Under the baton of Zubin Mehta, joined by the Orchestras of the Maggio Muiscale Fiorentino and Opera di Roma, the Three Tenors captured the cultural zeitgeist, elevating the tournament in a way which so much of the football itself had failed to do.
Indeed, Italia ’90 remains as evocative for its sumptuous sound as it does in the vision of a kneeling David O’Leary on a boiling day in Genoa, the hip swaying Roger Milla and the dewy-eyed Paul Gascoigne. Soccer, already the game of the masses, had found an unlikely bedfellow in an artform a great many still would consider aloof and not for them, while the Three Tenors would subsequently perform in the host countries of the three World Cups that followed – France, the United States and Japan.
All three, but Pavarotti in particular, popularised opera in a way which Andre Rieu has since replicated with classical music, much to the chagrin of those purists who factor the technique of such performances into their critique of an evening spent in the theatre.
Indeed, one could say the feats of the Irish soccer team that unforgettable summer, tuned many people into the game here who previously would only have given the sport a passing thought.
But when a pursuit, be it sporting such as soccer or indeed artistic such as opera, extends beyond its natural sphere of interest, with the masses bending towards either like a plant seeking light, those are phenomena we should applaud such a development, not decry it.
I for one am glad I craned an ear towards the Three Tenors that summer, in addition to completing my ‘World Cup ’90’ sticker collection while compiling two scrap books. My interest in soccer, newspapers and music greatly accelerated during that golden summer (I was 11) and all three remain prominent in my list of interests 28 years later.
At that age, I’d never have foreseen myself signing anything at all, let alone operatic, but thanks primarily to the late Dick Meany, I’ve sung two arias before paying audiences, ‘M’Appari’ from Flotow’s ‘Martha’ and Bizet’s ‘The Pearl Fishers’ duet with the mightily voiced Derek Ryan.
And it’d be a challenge to go down that route again in the near future given the primacy such numbers demand of one’s diaphragm and intonation levels.
My own limited performing, in addition to the interest triggered by the Three Tenors almost three decades ago, were all I could draw on as I took to my seat on Wednesday last, in a temporary theatre which cleverly used the backdrop of the castle stables as its stage. The 11-strong orchestra, positioned to the audience’s right, were led by Marco Zambelli, and to divert an eye towards this dozen during the production, not concealed by a traditional playhouse pit, in itself made for intriguing viewing. With neither performer nor musician artificially amplified, the quality of their efforts flourished to this untrained ear, as the occasional eye contact between singer and conductor ensured one did not outpace the other.
On a balmy night, perfect for a production which was set in a hotel in Algiers (sumptuously aided by a North African themed picnic served prior to the opera), the non-Italian speakers in the audience (most of us) were hemmed into the story via translated English lyrics interspersed throughout the opera.
That, in addition to the excellent plot summary provided in the programme, made following this “fully-fledged comic masterpiece”, as Marco Zambelli describes it, welcomingly easy to follow. And that accessible spirit was also suitably articulated in the programme message provided by Opera Chairman Michael Alen-Buckley.
“By focusing on everyone’s firm favourites, ‘Carmen,’ ‘Cosi fan Tutte’ and this year, ‘L’Italiana in Algeri’, we are able not only to satisfy the existing opera lovers cravings but also provide an entry point to ignite new awareness and passions in those who are only coming to this art form for the furst time,” he stated.
And on that front, I can assure Michael and new Festival Director Gemma Tipton that such a box was resoundingly ticked as this first-time opera goer was completely swept away by the setting, the site and the sound of an unforgettable night in a town I love.
While it’s far from operas I was reared, growing up in a house where all manner of music was whirring on tape decks, including the Three Tenors, is something I’ll be eternally grateful for. For what indeed would life be without music?
(With heartfelt thanks to Gemma Tipton for her kind invitation to Lismore Castle)