Home » Local News » A sad farewell to the 'Voice of Wateford'

A sad farewell to the 'Voice of Wateford' 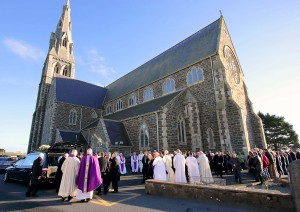 The remains of the late Billy McCarthy are carried from Holy Cross Church for interment at Riverstown Cemetery. | Photos: Noel Browne

Billy McCarthy (1954-2016)
Hundreds packed into Holy Cross Church on Tuesday last for the Requiem Mass of the late WLRfm presenter, Billy McCarthy, who died on Sunday, November 20th following a short illness.
Billy (62), was remembered by Chief Celebrant Father Pat Fitzgerald (PP St Paul’s) whose contribution to Waterford life was exemplified by the cross section of city and county society who had made their way to Tramore to honour a much loved friend and colleague.
“This gathering is a fair and fine reflection of his ability to connect across all boundaries,” said Fr Fitzgerald, in the presence of Bishop of Waterford & Lismore, Alphonsus Cullinan, Bishop Emeritus William Lee and 14 other members of the clergy. 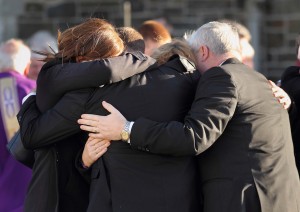 The family of the late Billy McCarthy, united in their grief

Fr Fitzgerald said that the death of Billy had “silenced a familiar voice”, who reflected on the “palpable sense of loss which is being felt by a very wide community on his sudden and untimely death”.
He told the congregation that “we have to constantly arrest ourselves to check that this is truly happening…inevitably we take each other for granted”.
The two days of “moving and eloquent tributes” on WLRfm in the time between Billy’s death and his Requiem Mass has seen an “avalanche of goodwill” offered to Billy’s family and his colleagues, said his sister Celine.
By the end of last week, the tributes written, emailed and texted into WLRfm had numbered well into their thousands, with Taoiseach Enda Kenny and Fianna Fáil leader Micheál Martin among the many who offered their sympathies. 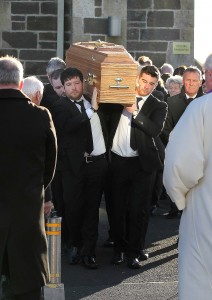 “Billy was a consummate professional,” said Deputy Martin. “Firm but fair is how I found him any time he interviewed me. I enjoyed going on WLR with Billy. You knew it would be lively but that’s what made being interviewed by Billy enjoyable.
“Only last month I was down in Waterford, and Billy had me on the show. His mastery of the topics and his deep knowledge of the important local, national and international issues ensured that his interviews were substantial and serious.”
Deputy Martin added: “Billy will be missed by everyone who knew him, or knew his voice. He loved Waterford, and it’s clear that the people of Waterford loved what he did.”
“Authentically and courageously, he leaves a void that will be hard to fill,” Fr Fitzgerald added.
Addressing the congregation with love, humour and overwhelming dignity, Des O’Keeffe described his 25 years with Billy as passing him by “in a blink of an eye,” a time in Irish life “when so much had changed” since their early days together.
“Many of you know him from Déise AM and WLR, but perhaps you don’t know a lot about his personal story,” said Des during his moving tribute to his partner.
Billy McCarthy was ordained to the priesthood, alongside his great friend Liam Power, back in June 1980 and spent time in the Irish College in Rome, later working on Vatican Radio where he “began his love of radio and love of all things Italian”.
He returned to Waterford and began presenting the ‘Good News Show’ on WLR, and an award-winning career beckoned after he left his ministry and took over the mid-morning slot, which was his domain for the past 27 years.
Des mentioned Billy’s many interests, including cooking, gardening, music, theatre, sport, and politics, and referred to his passionate belief in fairness and justice.
“Billy followed the US elections with great interest…I told him on the Wednesday morning that Trump had been elected, thinking that the shock might wake him up. Sadly, that didn’t happen and we are where we are today.”
Des asked those present to consider “becoming a blood donor in the coming weeks. They need the blood badly and Billy benefited from it during his two weeks. It didn’t change the outcome, but he needed it.”
Billy McCarthy is survived by his partner Des O’Keeffe, mother Kay, siblings Declan and Ronan, his doting nieces and nephews and his working family at WLRfm. May he rest in peace. 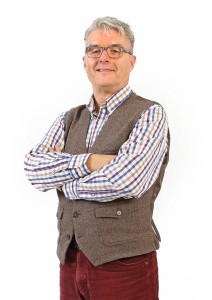 The late Billy McCarthy, whose remains were laid to rest in Tramore on Tuesday last.

I learned a lot through Billy’s death
Like how good Billy was
I know that by the tributes
People paid because.
So many hearts were broken
By the saddest news of all
That Billy died so suddenly
In answer to God’s call.
I saw Bill in his mother’s arms
When he was six months old
As I raced around the waterside
Passing the “Banks’ household”.
Little did I know back then
How famous he would be
Like the powerhouse voice of Waterford
And beyond the Irish Sea.
I feel sad for the station’s staff
That Billy left behind
He was their father figure
So caring and so kind.
He’ll be sorely missed by partner “Des”
Brothers “Ronan, Declan” too
And his only sister named “Celine”
My condolences to you.
I can’t find words for Billy’s Mum
For her heart’s beyond repair
Like Mary at the cross of Christ
To whom we’ll say a prayer.
Please take care of Billy, Lord
Grant him eternal rest
You know better than we do, Lord
He always did his best.
[By Eddie Sauvage]