A University of Substance

Frustration at the decades-long wait for University status in Waterford is understandable. The absence of such a status to this point has undoubtedly proven an impediment to the long-term development of both this city and the South East in turn. Roadblocks to such a desired outcome were undoubtedly erected in the past, and all have been heavily and justly documented. But refighting past battles and lamenting lost opportunities will do nothing for the here and now, let alone the future. Yet it would be ill-advised to view the delivery of a financially and academically enhanced third level institute in purely Waterford terms. We have to consider WIT’s future in regional terms. The time to decommission decades-old hang-ups about boundaries has long since passed. We have to view our future through a regional prism. 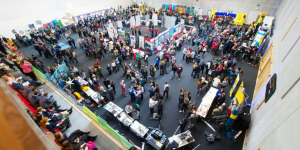 Last year's Open Day at the WIT Arena. Students want a sound education that will stand them in good stead in the workplace.

There is now widespread political consensus on the way forward for WIT, as the primary campus of the Technological University of the South East (TUSE), with a sister campus in Carlow and smaller scale facilities in both Kilkenny and Wexford. The politically convenient and, one could argue, politically exploitative approach which Deputy David Cullinane (SF) could have opted for when it comes to the TU bid would have won him many headlines and even more likes on social media.
But telling people only what they want to hear is neither sound nor realistic, politically speaking. That Deputy Cullinane has refused to opt for the populist take is to his credit.
Does everyone reading this newspaper want a standalone university for Waterford? I suspect so, and then some.
But the reality is that we’re not going to get a University of Waterford and anyone suggesting otherwise is signing a cheque he or she can never cash. We have to view our future through a regional prism.
It’s understood that the industrial action which Teachers Union of Ireland (TUI) members at both Waterford and Carlow Institutes of Technology recently voted for did not come as a surprise to management at WIT. WIT President Willie Donnelly said that management were “fully aware of the TUI’s proposed actions and (are) fully committed to work with the union to come to a resolution”. The position taken by the TUI may well serve to focus the minds of management at both ITs and if so, such a move may actually prove beneficial to all parties relevant to this process.
As a Union, their primary task is to serve their members and whether this action represents a cage rattle or something of altogether greater consequence to both Institutes remains to be seen.
But both ITs will be at nothing if they can’t bring their staff along with some level of meaningful harmony. Of course, the TUI has a progressive role to play in this instance too, and that should not be forgotten in the midst of this ongoing debate.
One hopes management and unions alike will see that our future, viewed through a regional prism, is the best way forward for all five counties. We truly need all the people party to such discussions to individually take it upon themselves to be the grown-up in the room. In addition to widespread political support for the TUSE, employers body Ibec has also made its position crystal clear following a meeting with regional Oireachtas members and the management of both ITs on Wednesday last. “A university will assist in attracting high quality FDI investment,” said John Farrell, Ibec’s South East Regional Director. “It will assist existing industries in attracting and retaining high quality and specialist senior staff, which is a challenge facing many businesses right now…With a strong South East and enterprise focus, a Technological University will drive regional development.” Mr Farrell said a climate of “positivity and confidence” is now largely pervasive across the South East, although the empty retail units in both Waterford and Clonmel, for example, cannot be ignored.
“The Ibec South East Regional Executive Committee believes a Technological University is the key to unlocking the great potential of the region,” he added. “A thriving business community is directly linked to a strong education and research infrastructure.” It’s pleasing to see a new building currently in construction alongside the fully booked ArcLabs Research & Innovation Centre at Carriganore. As an occasional visitor, it’s always a pleasure to break bread with those who want to live, work and prosper in our corner of Ireland.
ArcLabs is proof of what can be achieved within Waterford’s pre-existing third level matrix and one can only pleasantly speculate on how an adequately resourced Technological University could further encourage high-end graduates to take the innovative leap.
Change is rarely a stress-free exercise. Doing something different may well be the road less travelled but that doesn’t have to remain the case.
According to WIT’s current Strategic Plan, the TUSE aims to “present an attractive educational proposition to prospective students, both school leavers and others. This is vital to retain talent within the South East region and to attract talent from outside, including from abroad. We need to ensure the relevance of our curriculum not simply to regional need but the demands likely to be made on 21st Century global citizens.”
A TU ought to be a University equivalent educator. A TU ought to attract new and increased funding streams while also – and critically – being in a position to borrow.
The TUSE ought to be a hub for apprenticeships, life sciences, sports science, marine science, art and design and agricultural science. There’s plenty to go around in terms of the various sites that will make up our Technological University. We have to, indeed we must, view our future through a regional prism. There ain’t no other stone worth rolling.