“Don’t tell me a Irish is an example of civilised humanity. He may be the devil in the clothes of an angel but either way you’re talking to two when you talk to one Irishman. He can’t help you enough and he can’t double-cross you enough either…they have an awful fire burning inside them, like they were just the carapace of a furnace.” – ‘Days Without End’ (Sebastian Barry)
A passage in a book which demands re-reading purely to appreciate its language is akin to the utterly unanticipated gift under the Christmas tree. You’re doubly pleased to be its recipient. Blessed, even. And as I read the opening lines of Chapter Three in Sebastian Barry’s ‘Days Without End’, my eyes darting left to right as I took in the portrait he was painting, I knew I’d return to that assessment of the Irish condition. I immediately saw glimpses of people whose paths have intersected with mine, be they dead or living, and when I revisited those lines, I encountered a few more complicated, knotted examples of humanity. The arse kisser and the back stabber. The chances are we all know such sorts. 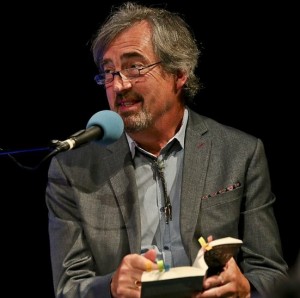 Sebastian Barry: “We’ve a tradition of writing that rivals the goddamn Greeks.”

But I’d never before read so brilliantly characterised a sentiment, presented from the perspective of the book’s protagonist, Thomas McNulty, a man who springs from these pages fully formed, a man made utterly real to the reader but conceived in the mind of Sebastian Barry.It’s a rare occasion in any journalist’s life to sit in the company of the greatest living Irishman or woman in their respective field, but the two-time Costa Book of the Year winner and Irish Laureate for Fiction certainly fits that bill.And that’s why I felt so much of the conversation I had with the author at UHW’s Waterford Healing Arts Trust was worth sharing over the course of two editions. Barry speaks as he writes, with incisive, brilliant economy, occasionally backspacing himself to steer a sentence onto a different course.
It was a pleasure to sit with him and talk about a pursuit which has also happily occupied so much of my own life, sat in front of a laptop, a coastered mug of tea to my right, a scribbled notebook to my left, with just a ticking clock or the waking wildlife outdoors breaking the silence while I write. Sebastian Barry has sat with his thoughts and a typing machine for over 40 years and he’s clearly still besotted with the whole carry-on, something the reading world is evidently grateful for. And he’s thrilled to see the Irish literary strength of storytelling, via prose writing, so vibrant in 2018.
“Forty years ago, people would say that, ‘oh you’re in this great tradition of Irish writing, there are so many great Irish writers and why is that when there’s only four million people (here)?’ Well, at that time there was, what, only 3.7 million and when I was born in 1955, I think there was only 2.5 million of us in the Republic – there are more people in the back end of Iowa than there are in Ireland – but they’re not particularly well known for their dozens and dozens of great writers. We have a tradition of writing that rivals the goddamn Greeks. And that’s not really likely since we’ve never been that dominant civilisation but we’re an idea. People have an idea about Ireland…and when people abroad meet you, even when Irish people meet each other, there’s a gratitude and bonhomie because somehow Ireland, and the Irish, are good things. And this is also a level of miracle. Why should that be so? We know the problems in Ireland, it’s not as though we’re an ideal people but there’s an idea, and somehow that idea has enabled people. It’s not fashionable to love your country, it’s not fashionable to honour your country by your writing and while you wouldn’t necessarily frame it like that, that’s what Irish writers do, in a way. They may be highly critical of the country like Joyce or even leave it, but it is responding. After all, a row with someone you love is the worst type of row…but Ireland is, often in itself, so beautiful.”
Sebastian Barry loves both his country and his work, and remains joyed, even surprised, to have made a living through his way with words. “I never lose the sense that when I’m in my house, that it was made out of books, and that the children were educated out of what I and my wife were doing. Again, it doesn’t seem possible that you can just look in your brain for stories, then get them out and that that would actually would actually generate an entire life. That does seem unlikely when you say it, and although I was a bit frightened of the Laureate thing because I thought I needed to work, but then at the same time I just thought it was a good thing. When they make you a Second Lieutenant,you just hope you’ll lead your seven men well in the platoon, that you won’t let them down; that was the feeling. But I knew it was a good thing.”
Sebastian Barry is clearly a man with plenty more to both say and write. Long may he reign and long may we benefit from his masterful musings.