Home » Local News » An Edwardian Take on the South-East

An Edwardian Take on the South-East

The gift which inspired both this and last week’s column, a first edition which was printed just yards from this newspaper’s office on O’Connell Street almost 120 years ago, is a true Waterford treasure.
To be in ownership of the lengthily titled ‘Beauty Spots In The South East of Ireland and how to see them by Car or Cycle’, a book which predates the births of my Grandparents, has proven welcome, surprising and wholly entertaining.
To read CP Redmond’s take on some of the places I know and love best across Waterford and her neighbouring counties (the book also features a splendid fold-out map of the region) has been an absolute delight, with its support advertising alone worthy of several hours’ study.
The discovery of Stokes’ Baths in Dungarvan came as a revelation, with its adjoining description detailing “Turkish Baths, Hot and Cold Salt Water Reclining Baths, Shower Baths, Sitz Baths, Spray Baths and Needle Baths…A Splendid Salt Water Plunge Bath is attached and the Shampooing Apparatus and Attendance are unexcelled. These baths are second to none in Ireland, and the Sanitary arrangements are perfect.” 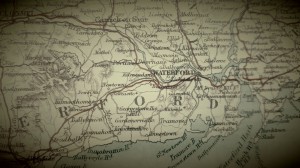 A section of the splendid fold-out map which features in Cornelius P Redmond’s book, ‘Beauty Spots in the South East of Ireland and how to see them by Car or Cycle’, which was published in 1901.

Such a luxuriant facility would be gratefully received nowadays by a great many of those now cycling into Dungarvan via the Greenway: and that the book also details cycle routes feels utterly contemporary in the midst of the current two-wheeled boom.
The reverse side of the fold-out map features ads from Dooley’s Hotel and T&H Doolan’s (which we’re told was then home to “Unconquerable Whiskey”), Pierce’s Cycles as well as the Maguire Cycle Agency on Wexford’s North Main Street. In addition, occupying a full third of this fold-out is a sparsely worded promotion for a Thomas Breene of 6, Henrietta Street, Waterford, who “Executes Commissions on all English Races And Principal Irish Fixtures”. Calling Mr Breene wouldn’t have delayed potential customers a great deal either since his contact number was 70. That’s right. Seven-Zero.
Meanwhile, an adjoining advertisement for Hayes, Conyngham & Robinson Limited assures readers that the Dublin-based pharmacist which operated eight branches (with three alone in Kingstown) was a purveyor of “Finest Drugs” and “Purest Chemicals”. Try getting that text through advertising standards in 2018!
Redmond recommends a range of regional tours, the first of which takes in a round trip of Waterford, the Barony of Gaultier and Tramore, including a cycle or drive-by of a house in Newtown “in which the father and mother of Lord Roberts, of Waterford and Kandahar resided, and where he spent his boyhood years”. The conflux of the Suir, Nore and Barrow Rivers is best observed from the “Hill of Faithlegg, and from this point of vantage can also be seen the mansion of P.M. Power, Esq,. D.L. (said to be the richest commoner in Ireland), and of Dunbrody Abbey, the noblest monument of antiquity in Wexford County”.
Regarding Dunmore East, home to a pier which cost “upwards of £100,000”, Redmond, for whom the class system was clearly foremost in his editorial process, writes: “During the fishing season, boats from all quarters of the Kingdom come to anchor here, and special steamers can frequently be seen during the Autumn taking cargoes of herrings and mackerel for the English markets”.
In an advertising-led plug to cyclists, Redmond recommends the hospitality of two hotels in Passage East (Kavanagh’s and Love’s) along with Shipsey’s in Dunmore as well as Tramore’s Grand and Hibernian Hotels.
“The Cyclists’ Touring Club or Irish Cyclists’ Association can obtain breakfast (tea, coffee or cocoa, with bread and butter, toast and preserve, ham and eggs, chops, steak, cold meat or fish) for 2s.; subtstantial luncheon for 1s. 6d. Table d’Hote dinner for 2s. 6d., and bed for a like sum.” Redmond also describes the “run from Tramore to Waterford” as “a most enjoyable one of seven miles, over a level and well-kept road, and we thus conclude one of the most picturesque and historically associated tours to be enjoyed in the South-East of Ireland”.
Humorously, and to think that local newspapers would still be writing about the condition of this very route over a century later, Redmond describes the highway linking Waterford city to Ballyhale as “one of the worst roads in the whole of Ireland”. This second day tour also took in another regional treasure, Inistioge, which the author describes as “picturesque in the extreme” and which had previously sent “two representatives to the Irish Parliament” prior to the Act of Union (1801).
The author notes that nearby Woodstock Gardens, the seat of the Tighe family, did not open during 1900 due to the period of mourning which marked the death of “the famous old” Lady Louisa Tighe, whom we’re name-droppingly informed, “danced at a ball in Brussels on the eve of Waterloo”. New Ross, Redmond states, was a “‘burgeese town’ in the time of Edward I., and for many centuries was the theatre of warlike operations”. During the 1798 Rebellion, Ross also bore witness to “many sanguinary engagements between the Irish, under Beauchamp Bagenal Harvey, and the Imperial Troops commanded by Lord Mountjoy, who lost his life at the ‘Three Bullet Gate’, in one of the many battles fought”.
This travelogue reveals both the delights of this region to curious British visitors and the political leanings of the then editor of The Waterford News, whom, as another advertisement reveals, was also an agent for The Patriotic Assurance Company, which was committed to “Moderate Rates, Absolute Security, Prompt Payment (and) Large Bonuses’.
This delightful publication is something I will always treasure and curate, in addition to the April 6th, 1918 edition of The Munster Express which hangs in the hallway above my Grandmother’s sewing table. They truly don’t make them like they used to…