An ill-fitting take on liberty 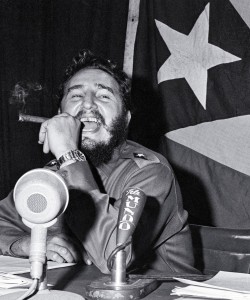 The championing of a military dictator shouldn’t rest well with those who advocate democracy on home shores.

Well, well, well, didn’t we all get a little knicker-knotted following the death of Fidel Castro? The commentaries about the former Cuban President have proven as varied as they’ve been plentiful, as newspaper editors dusted off long-since written obituaries and gave them a polish over the weekend when marking the death of Latin America’s most divisive figure. More on that anon.
I recall a visit to the then Cork Examiner archives in my secondary school years, when the gig I’m doing now was about the only trade I ever envisaged myself ending up in.
A very enthusiastic staff member, who had probably given that same walking tour many times over, took a small group of Carrick-on-Suir CBS students into ‘de Paper’s’ photo archive. Like Augustus Gloop in Willie Wonka’s factory, I couldn’t consume enough of my afternoon in this sensory pleasuredome, but unlike Roald Dahl’s rotund Teutonic creation, I made it to the end of the tour.
Thankfully, instead of being fed into a machine as Augustus was, my time on Academy Street ended with dinner in the Examiner Boardroom, overlooked by a member of the Crosbie family, immortalised on canvas. I’ve not had that many ‘power meals’ so the few that have come my way are easily remembered. Every nerdy goosebump I had stood on end that day.
During our time in the photo archive, full of touch release drawers that revealed folders of alphabetised snaps of the great and the good, from Cork GAA hurling royalty through to blood lined monarchs, our guide commented upon the likelihood of assembling a special spread on the British Queen Mother.
He said at the press of a drawer here, any photos acquired by the Examiner over the previous five decades featuring the Queen Mother would be easily traceable, allowing them to paste together an extensive tribute with little fuss.
Given that the dowager queen’s obituary was long since written, he added, all that was required was some appropriate updating of said piece and away the pages would roll when the time came. Yet it would require the guts of a further decade before that preparatory work was ultimately pressed into active service.
Referencing active service brings me back to Castro, ‘El Commandante’, whose achievements in the office he took by arms, without the mandate of his people, were unsurprisingly championed by the Irish left over the weekend.
In the Spring of 2008, I spent three weeks in Cuba, and it was a fascinating experience. Within 36 hours of landing in Havana, I was head over heels in love with the crumbling city, sipping Daiquiris in the Floridita, one of Ernest Hemingway’s favoured hostelries, and taking in the music played on countless street corners. Talk about cultural immersion!
The people had nothing – the State owns all property – yet those we spoke to in pidgin Espanol, be it in a huge multi-storey cigar factory, or in the hotels or Casas Particulares (Cuban B&Bs), including a Soviet-built apartment block which hosted me in the farming town of Vinales – were incredibly breezy.
“Sure we were all poor”, as uttered by a Moore Street trader time and time again, “but we were happy,” has come to mind many times since when recalling my three weeks in Cuba.
When entering the country, I was asked to state my profession. I opted for teacher, which was no lie given that I’d spent that year, and part of both the previous two, lecturing on Wednesday nights in Dublin. In a country which viewed journalism with suspicion, I opted for discretion.
After all, this was a country where at least one factory employee in every single factory, had the task of sharing the thoughts of President(s) Castro, via a tannoy, from the editorials penned in State newspapers each and every morning.
How the left would guffaw at the thought of our Taoiseach’s message being read aloud at the start of each working day in every workplace in this Republic!
Cuba remains a country where to profess an opinion which differs with the ruling power could very easily land one in prison.
And that’s why, for all the eulogising over free healthcare, education and no homelessness, I cannot reconcile myself to championing Castro given his penchant for silencing and eliminating dissent.
In the ‘Black Spring; of 2003 alone, 75 journalists were jailed and imprisoned in Cuba: again, how does this sit well with those describing Castro in purely heroic terms?
Waterford-born Richard Mulcahy retains an uncomfortable place in the history of independent Ireland, given that the provisional government he was party to sanctioned the executions of 77 fellow Irishmen during the Civil War.
During the War of Independence, the British executed 53 less, and Mulcahy’s Civil War brief denied him leadership of the first inter-party government in 1948.
It remains unclear how many were executed in Cuba under Castro’s watch. A 2005 Wall Street Journal report, referencing the work of the Cuba Archive Project, estimates that “5,600 died in front of firing squads and another 1,200 in ‘extrajudicial assassinations’”.
Take the firing squad figure alone, that’s the equivalent of 400 Bloody Sundays, and over 72 times the tally regrettably sanctioned by our first Free State Government. Yet this is a man who did good, supporters of his who’ve never spoken to a Cuban, let alone visited the country, will tell you.
Imagine an Ireland with only two leaders since Eamon De Valera stepped down from active politics: both of them brothers, neither of them possessing an electoral mandate. That’s not a country I’d like to have grown up in.
Cuba Libre? On the basis of my time there and subsequent reading? Far from it.