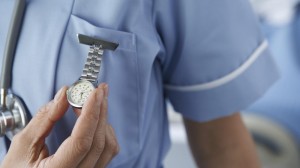 “Courage. Kindness. Friendship. Character. These are the qualities that define us as human beings, and propel us, on occasion, to greatness.” – RJ Palacio
Wednesday evening last turns to night at University Hospital Waterford. The nursing night shift crew are being briefed by their outgoing day colleagues on developments, both positive and negative, regarding the patients bedded in Medical 1. There’ll be no doctors or consultants here throughout the night, barring an emergency.
The nurses speak to each other with both a sense of purpose and a welcome dollop of levity: in a vocation such as theirs, in an environment so regularly engulfed by loss, such a quality is essential.
The nurses reflect on the lovely gifts they’ve received from outgoing patients or members of other patients’ families, and one can sense their gratitude for being in receipt of such deserved and warranted goodies.
And they talk about that day’s medical departures and arrivals and the delicate juggling match each ward has to conduct when it comes to accommodating patients with the most acute of difficulties.
All the while, from their central work station, they’re keeping an eye on the patients who don’t have any company at that particular time, and fielding queries from concerned, sleep-deprived loved ones of some patients who, sadly, won’t see the comforts of home again.
Medical expertise and knowledge is one thing, but to demonstrate empathy and compassion to both the terminally ill and their grief-stricken relatives is to profess a quality that no Workplace Relations Commission verdict can truly adjudicate upon.
I don’t care if some viewed it as a pre-election gimmick by Fine Gael or Labour, but I was relieved to see students nurses and midwives receiving pay restoration which came into effect on March 1st, largely undoing cuts implemented in 2011/12.
This means that:
* During the 36 week clinical placement the pay of the fourth year (nursing/midwifery student) shall equal 70 per cent of the staff nurse scale (€9.48 per hour);
* Sixteen (16) weeks after graduation the newly registered nurse/midwife will move to the second point of the scale (€29,497) which represents an increase of over €2,000 while
* The new arrangement also provides for a further review, and discussions, on the outstanding issue of granting retrospective incremental credit for the graduate classes of 2011-15.
This represents a positive step for a generation of graduates who must have wondered what role they’d played in the economic collapse, which commenced before some had even filled in their CAO forms.
Which brings me to this week’s soapbox. As of May 2015, former Taoisigh Brian Cowen and Bertie Ahern were in receipt of annual State pensions totalling €80,810, with their predecessor John Bruton receiving €72,908.
Consider this: if longevity befalls Mr Ahern as it has Liam Cosgrave, the former Fianna Fáil leader may yet have another €2,505,110 of our money to lodge in a bank account – if he’s managed to open one since retiring, that is. All in all, not bad for a man who required that infamous ‘dig-out’.
Seanad candidate and former Tánaiste Michael McDowell pockets €64,958 per annum while his former Progressive Democrat colleagues Mary Harney and Des O’Malley respectively receive €63,478 and €56,059. Meanwhile, former Waterford TD and environment minister Martin Cullen is entitled to an annual State pension of €54,182.
Taking these seven former politicians alone into account, a further decade of such pay-outs would come to a grand total of €4,732,050: the equivalent of 202 post-qualified, pre-registration staff nurses or midwives entry salary of €23,361 (Source: INMO).
Incidentally, the scale of a staff nurse’s salary (including Registered Midwives, Registered Sick Children’s Nurse and a Registered Mental Handicap Nurse), as of January 2016, kicks off at €27,483, and rises, in increments to €43,800. It’s hardly a spectacular wage for one of our single most demanding jobs anywhere on this Earth.
And when one sets it alongside the pension pots presided upon by men and women who are, in reality, political deadwood, it’s difficult not to be angered by such gross excesses when contrasted with the hard toil, honest endeavour and awesome compassion demonstrated by our nurses.
Should our retired political representatives have pensions? Of course. But at the current rate? Of course not. So why not reduce these outlandish annual pension pots (and there are many more – Ray Burke, for example, who receives €42,262) and put that money to practicable use by employing more student nurses?
Just imagine the new government – or any future government – announcing a complete revision of ministerial and political pensions and committing to retaining saved monies from such pots for reinvestment elsewhere in our public services. Such a move would be hailed as visionary and just: an act of economic and civil compassion.
But if I were to hold my breath for that to ever happen – no doubt the legal entanglements of legislation would be spouted upon ad nauseam infinitum by our legislators – I’d require the good graces of our wonderful nurses to guide me back to full health.
It is politically and, at times, journalistically convenient to point out what’s not working at UHW and what clear shortfalls remain in place there.
But if we choose not to shine a light on the angels in the corridors and wards of our region’s largest medical facility, and if we choose not to champion the valour of their duty and the quality of their character, then we too are failing them.
To the nurses of UHW who assist the ill and their devastated loved ones, a heartfelt and fulsome thanks: for your courage, your kindness and your character. May it return to you a hundred fold.