Bath Street and the changing needs of Waterford's homeless 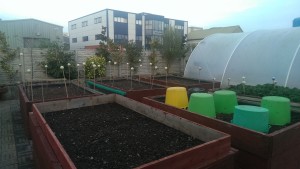 The garden at McGwire House, which was developed and is maintained by its residents

“Lady Lane was a place that evolved over time,” said Gordon Power, who works at the Saint Vincent de Paul’s Hostel on Bath Street. “but, in the end it wasn’t suitable given the changing needs of homelessness”.
The new hostel, which can accommodate 38 residents, is a custom-built facility which surely represents one of the best such centres of its kind in the country at present.
“We were fortunate in that we secured funding for this building through the McGwire Trust – monies that were left to the Society several years ago, specific for investment in assisting the homeless, and having identified this particular site, we bought it, developed it and we’re very pleased with the end product.”
In terms of current resident numbers, Gordon replied: “Thirty-eight. We’re always full – and that’s a sign of the times. Initially, when the hostel was in the development stage, that only 20 bedrooms would be required – we pushed for 25.
“But we had also identified the adjoining building to this, which was previously occupied by the Probation Service, and we annexed that too, and that in turn allowed us to developed a 37-bedroom hostel, and we have one crash (emergency) bed in addition to that as well.”
The contrast between what the VdeP can now provide on Bath Street compared to the dormitory-like ‘cells’ that were once the norm in Lady Lane also reflects the evolution of the service now provided to residents.
The men residing here receive a level of dignity and compassion which is at the heart of the Vincent de Paul’s Mission Statement: “Through person-to-person contact, we are committed to respecting the dignity of those we assist and fostering self-respect. We assure confidentiality at all times and endeavour to establish relationships based on trust and friendship.”
Mr Power said the VdeP always strives to “help anyone who turns up at our door”. He added: “We refer everyone to the Homeless Officer in the City (& County) Council first of all, as we need to verify if the person at our door is homeless, and once that’s been confirmed, then we provide a bed. We’ve two main types of resident – short-term, and by that I mean about six months and then, of course, we also have the longer term resident…a cadre of older men who look on this as their home, and as long as we can sustain them here, then we will.
“Over those six months, the resident will link in with our project workers (as detailed on the opposite page)…and these workers aim to get the residents into a sustainable living situation. We also try and teach residents life skills, such as budgeting, we’ll teach them to cook – basic skills for most of us but very important long-term skills for residents when it comes to living an independent, sustainable life.”
The residents themselves have also helped to develop a beautiful garden to the rear of McGwire House on a site which the Society also bought through McGwire Trust monies.
“All the stonework out there was done by the residents, we grow our own fruit and veg here, we’ve raised beds in the garden, put in a polytunnel too and it occupies a lot of time well for many of the residents, and they’re very proud of it. And it’s up to them – we don’t tell them to do it.
“We’ve a common room for residents, a gym which the younger men use too and it’s a very pleasant living environment. Each room is private, this is a dry hostel – there’s no alcohol permitted – because we need to have a duty of care to all of our residents, some of whom are in recovery from addiction or have just come out of rehab. And we’ve seen a difference in the mood and the attitude of residents since we moved out of Lady Lane.”
While people can “rotate back and forth” from McGwire House, Gordon Power said there have been “success stories too – and when someone sees the light and move into an independent life, get back into education and develop a skill and get into employment, that’s tremendously rewarding.”
The VdeP’s good work goes on, and, ahead of the launch of their Christmas Appeal this week, it’s good to know the Waterford Society is as vibrant and committed as ever.