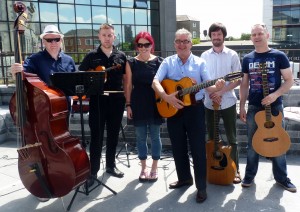 The late Billy McCarthy, pictured with Gypsi Swing outside the Theatre Royal in June 2014

I first met Billy McCarthy in March 2010. Pádraig Ó Gríofa and Michael Grant of the Waterford Variety Theatre Club were looking for some new talent to perform in the Theatre Royal Variety Performance.
And what was the medium for their ‘Search for a Star?’ Why, Waterford’s most listened-to radio programme of course!
A clip of my rendition of “Any Dream Will Do” was broadcast along with my competitors’ clips once an hour on Déise AM for a week.
Billy’s listeners chose Esther Coady, Cliodhna Gahan and I to perform in the majestic Theatre Royal for three packed houses and most importantly, adjudicator Bryan Flynn.
Some weeks later, I was in the David Hennessy Stage School at a rehearsal and costume fitting.
There I was, looking frankly ridiculous in an ill-fitting Technicolor Dreamcoat, singing my heart out for Director Gary Power when Billy came in to watch some of my rehearsal.
His face was a picture and his famous laugh rang out heartily in jest. As a current affairs nerd I had grown up listening to him, usually tuning in for the repeat after midnight as I had school during the day.
To have my radio idol compliment me on my performance meant the world to me. Cliodhna won the overall prize, but it didn’t matter to me as I had got the opportunity to meet two stalwarts of Waterford theatre, Bryan Flynn and Billy McCarthy.
Billy performed “I Won’t Send Roses” in the same show and I remember being with him backstage on opening night shortly before he went on. He was visibly nervous and told me how a cruel review had affected his confidence and thus this was his first time to sing on stage in many years.
I watched from side stage as he overcame his fear to deliver a great rendition of that classic show tune. With him on stage that night was Glenn Murphy, a young man whose talent Billy often championed on Déise AM.
As my fledgling career in radio took off I saw more of Billy and he often read out my tweets on the show. The last time I saw him was on election count day back in February. I was working for Newstalk and he greeted me warmly as he made his way to WLRfm’s position to host their coverage. He was clearly happy to see me doing so well.
On Sunday night last, I was sorting through old photos and I came across this shot I took of him with ‘Gypsi Swing’ in the Viking Triangle after an outside broadcast in June 2014. Rest in Peace, Billy. How you loved your City of Music.