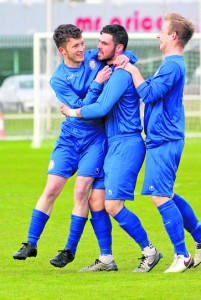 League of Ireland First Division
Waterford United 3 UCD 1
Matt Keane
Waterford United recorded a much need victory when they defeated UCD at the RSC on Friday night last.
The match saw the return of manager Roddy Collins to the dugout for the first time since his six match suspension and it was the clear to see that the players benefited from his promptings.
Before the game Collins admitted that this was the most important game of his duration here and he also made it clear that many of the players were playing for their futures at the club following the drubbing in Limerick the previous week.
The final score was a repeat of the result when the teams met in Dublin in the first series of games.
The Blues struck the front with their first attack on seven minutes when a long Ian Sinnott free kick was knocked down by Colum Nugent before the ball was cleared to Darren Murphy, who volleyed past keeper Conor O’Donnell from 22 yards.
UCD striker George Kelly did have a chance to draw his side less than two minutes later when he got his head on the end of a right-wing corner kick from but his free header from deep inside the penalty area was wide of the near post.
James O’Brien could have doubled the Blues lead with a stunning effort from 25-yards on 13 minutes when he cracking shot that had the visiting keeper O’Donnell beaten hit the top of the crossbar before going over.
A brilliant second goal arrived for the hosts on 26 minutes when McAlavey played the ball out to the left for Dylan McGuire, who put in a brilliant ball to the near post where Philly Gorman powered an unstoppable header to the roof of the net past Conor O’Donnell. The UCD keeper kept the Blues at bay again on 30 minutes when Anthony McAlavey got free out on the left side before putting the ball on the head of Gorman but his header was caught underneath the crossbar as the Blues really took the game to their opponents.
The students did have a couple of chances to pull a goal back with captain Gary O’Neill having a decent shot wide of the left hand post on 33 minutes before Maxi Kouogun had a close range effort blocked on the line by defender Ian Sinnott.
Blues captain Philly Gorman grabbed his second goal of the game that really put the home side in the driving seat on 59 minutes when a majestic back heel from Anthony McAlavey sent the striker into the clear and he drilled a low left-footed shot past keeper Conor O’Donnell.
UCD pulled a goal back with ten minutes remaining when Gary O’Neill whipped in a corner kick from the left that was flicked on by Jason Byrne into the path of Tomas Boyle, who found the back of the net with a close range.
Anthony McAlavey, who was quite brilliant throughout the ninety minutes, could have added a fourth for the Blues minutes later when he showed his class on the left side of the penalty area but after O’Donnell saved his first effort, his second attempt was headed off the line.
WATERFORD UNITED; Kevin Burns, Robbie Buckley, James Dermody, Ian Sinnott, Colum Nugent, David O’Leary, James O’Brien, Darren Murphy (Dean Reidy `82), Philly Gorman, Anthony McAlavey, Dylan McGuire (Eoin Rhodes `66) (Shane Mackey `90)
UCD: Conor O’Donnell, Mark Langtry, Sean Coyne, Maxi Kouogun, Tomas Boyle, Greg Sloggett (Jason Byrne `63), Dylan Watts, Gary O’Neill, Ryan Swan (Kieran Marty Waters `77), George Kelly, Jason McClelland
REFEREE: David Keeler (Cork)