Matt Keane
Waterford FC lost a truly amazing game at the RSC on Sunday afternoon last. Having won the Southern Section of the league and the U17 Cup, John Furlong’s side were hoping to win the National League outright especially after coming out on top against Dundalk on penalties in the quarter-final.
They looked well on course to reach the final when they went in leading two nil at the interval but a disastrous four minute spell early in the second half cost them dearly. 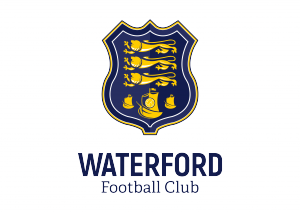 They never fully recovered from the concession of three goals between the 55th and 59th minute and as a result their dream of the treble went down the tubes.
Blues goalkeeper Charlie Heffernan was called into action to make the first save on three minutes but David Okpailo’s right-footed shot from 14 yards was straight at the netminder.
Jack Larkin had the first shot for the Blues on 16 minutes when Regix Madika’s left-wing cross was knocked into the path of the Blues skipper by Colm Whelan but his left-footed shot was deflected over the bar..
The Blues took the lead in brilliant fashion on 29 minutes.
Mike Nzongong was brought to ground by defender Shay Curley and Darryl Walsh gave the Bohemians keeper Sean Bohan no chance with a magnificent left-footed effort from 25 yards.
Nzongong doubled the Blues lead in the final minute of the half when Regix Madika charged clear down the left channel and crossed to Colm Whelan who put the ball on a plate for Nzongong who planted a left-footed shot past Sean Bohan from 16 yards.
The game totally turned on its head in favour of Bohemians in the space of four second half minutes as the Blues were left stone cold conceding three times.
Sobe Nwaokolo started the comeback on 55 minutes when he a left-footed shot to the roof of the net from 12 yards.
Bohemians were back on level terms two minutes later when Denis Smith played a pass to Lido Lotefa and although the advancing Charlie Heffernan got his head to the lob from the striker, he couldn’t keep the ball out of the net.
It was almost beyond belief to the home faithful that the Blues found themselves behind on 59 minutes when Lido Lotefa cut into the area with ease and fired a left-footed shot past Heffernan from an acute angle.
Blues captain Jack Larkin had a glorious chance to level the tie on 72 minutes when Colm Whelan set him up but he blazed wide of an open goal when he looked certain to equalise.
The home side fell further behind three minutes later when Lido Lotefa split the defence with a superb through ball for David Okpailo and he drilled a right-footed shot under the body of keeper Charlie Heffernan.
Waterford got themselves back into the contest on 80 minutes when Mike Nzongong slotted a right-footed shot beyond the outstretched arm of Bohemians keeper Sean Bohan.
Colm Whelan went so close to equalising the game three minutes later when he reacted to a loose ball but his close range effort was hacked off the line for a corner kick.
WATERFORD FC: Charlie Heffernan, Kallum Broaders, Greg Waters (Lee Costello ’79), Adam Conway, Darryl Walsh, Dean Beresford, Jack Larkin (Torik Adegoke ’90), Darragh Power (Ciarán Brennan ’66), Mike Nzongong, Colm Whelan, Regix Madika (Jack O’Donnell ’79)
BOHEMIANS: Sean Bohan, Cian Trehy, Denis Smith, Shay Curley, Mitch Byrne, Alex Kelly, David Okpailo (Brad Hennessy ’87), Sean McManus (Jordan Maguire ’46), Lido Lotefa (Denis Robu ’90), Jack Moylan (Frankie Haba ’79), Sobe Nwaokolo (Liam McGrath ’84