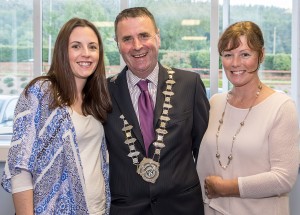 FINE Gael Councillor Liam Brazil has been elected Cathaoirleach of the Comeragh District of Waterford City & County Council.
Speaking at the Comeragh District Council AGM held in Ballymacarbry Community Centre last Tuesday June 30th, Cllr Brazil outlined his plans to promote the tourism potential of the entire Comeragh area.
He was proposed by party colleague Cllr Seanie Power and seconded by Fianna Fáil Cllr John O’Leary.
Cllr Brazil highlighted the importance of unity in promoting all that Comeragh has to offer.
“If we can all look at the bigger picture, the Comeragh area will thrive,” he said.
“We have a lot to offer and a lot to gain. I feel the Comeragh area has been undersold in relation to tourism.”
He called for increased signage to highlight attractions within the area such as the Mahon Falls and the Anne Valley Walk in Dunhill.
“When people come to Waterford, they look for Waterford Crystal, and their next stop is Killarney, Cork or Clare,” he said.
Cllr Brazil praised the work of CEO of Waterford City & County Council Michael Walsh and called for a part time tourism officer dedicated to the Comeragh area.
He also signalled his intention to continue to work on issues related to mental health and suicide awareness during his tenure.
Outgoing Cathaoirleach Cllr M J O’Ryan (Fianna Fáil) had decided to hold the AGM of the Comeragh District in his own area.
Councillors and council officials who were in attendance were given a guided tour of the Ballymacarbry Community Centre prior to the commencement of the meeting.
Cllr O’Ryan said it was a privilege to have held the position throughout the past year and highlighted the proud family tradition which he had continued.
He also highlighted the many positive developments which had taken place within the Comeragh District and said councillors had adopted a “glass half full” approach.
He was praised by his fellow councillors for his work throughout the year.
Fine Gael Cllr Seanie Power was elected Leas-Cathaoirleach after being proposed by Cllr Mary Butler and seconded by Cllr M J O’Ryan.