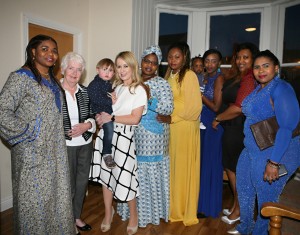 A happy scene at Bridgewater House , pictured with Manager Martina Walsh, after a group of long-term residents has received their Irish residency papers. Inset: The entrance to the building. |Photo: Anne Marie Magorrian

Bridgewater House, the former Saint Joseph’s Convent of Mercy, which housed refugees and asylum seekers in Carrick-on-Suir since 2001, has closed its doors.
The building, which is privately owned by Millstreet Equestrian Services (run by Noel C Duggan and brother Thomas), had been leased to the Government via the Reception & Integration Agency.
But given the drop in numbers seeking asylum to the State, coupled with the residency papers granted to many of Bridgewater House’s long-term residents in March, the facility no longer possesses a critical mass of residents required to retain the function it has largely served since the turn of the century.
In a statement, the Department of Justice explained that the closure was due to the drop in demand for direction provision accommodation for asylum seekers, which also reflects the national picture.
By the end of September, the facility, which had a capacity for 95 residents, was home to just 27, with 10 more residents having departed the centre in the previous month.
Those who were in residence there are now believed to have been relocated at the Mosney Accommodation Centre in County Meath. 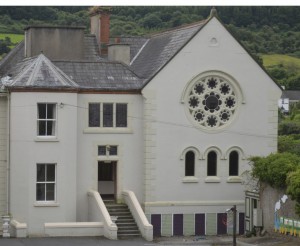 On March 12th last, there was great celebrations at Bridgewater House, when several asylum seekers received their residency papers, some of whom had been waiting many years for such a decision.
“All of the families have integrated very well into Carrick-on-Suir over the years,” said Centre Manager Martin Walsh at the time.
“The children have grown up and attended schools in the town and Riskiat Saeed and Faith Matis, have sons, Teslim, Shatter and Lucky who have played for the Davins GAA Club and Carrick United FC over the past five years. Teslim and Shatter also joined the boxing club. Riskiat spoke of her time in Carrick-on-Suir and the welcome they received from locals. “I would like to thank the people of Carrick for how welcome they have made myself and my boys feel over my 10 years in Carrick.
“I also can’t thank Martina our manager enough for her help and support she has given me, I call her my sister and will miss her terribly, I had happy years in Bridgewater House and I am grateful for everything.”
Another departing resident, Mamy Kouyte from New Guinea was only 18 years old when she first arrived in Carrick-on-Suir, joining the Murphy’s Set Dancing and Sean Nós group in Rathgormack, which is run by Mary Murphy and her daughters Leanne and Bronagh.
Marian Landers took Mamy under her wing, introducing her to set-dancing and has been a great support to her over the years. “Mamy is a marvellous dancer and would make a great dance teacher,” said Marian.
In a joint statement, the departing group stated: “We are grateful, to finally getting to stay in Ireland as we all came with different problems. We would like to thank the Irish Government and the people of Carrick for their warm welcome during our time here and we thank Martina for our ‘going away’ party and for her undivided attention to us all during our years in Bridgewater House.”
We wish those who have left Bridgewater House, the place that was their home for many years, every good wish for their respective futures.