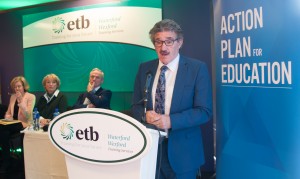 Minister of State John Halligan speaking at the launch of the Action Plan for Education held at the Waterford Training Centre on Friday last.

The first in a series of regional meetings on the Action Plan For Education was held by the Minister for Education Richard Bruton at the Waterford Training Centre on Friday last.
The Plan which is aimed at making the Irish Education and Training Service the best in Europe by 2026 was launched earlier this year. The event was attended by Minister of State John Halligan as well as various educational stakeholders from across the region.
Speaking at the event Minister Bruton described apprenticeships and traineeships as “one of the greatest casualties of the recession” while Minister Halligan said the future skills of Waterford apprentices must be in line with industry demands.
“Our basic aim is to sustain our economic progress and use it to build a fair and compassionate society. We can do this by providing better opportunities for more people from disadvantaged groups as well as ensuring we create more sustainable well-paying jobs,” said Minister Bruton. 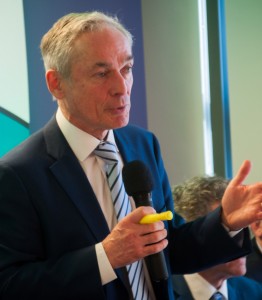 He also outlined plans to increase investment in the education sector over the next 12 months. “This is the first year in eight years in which we’ve been able to make extra funding available to the third level sector and WIT along with other colleges will be beneficiaries of that.”
The Forum was held at the Waterford Training Centre, one of the largest training centres in the country. It operates under the aegis of Waterford and Wexford Education and Training Board which provides fulltime, part-time and evening courses to around 16,000 learners each year.
Minister Halligan described the event as unique, saying it was the first time in the history of the state that such a plan had been undertaken.
“It is recognised that it has been a very difficult time for the South East over the last number of years. Unemployment was up to between 16 to 22 per cent but it has been dramatically cut to seven to eight per cent in the last couple of years.”
He added that fiscally it was still difficult for the country. “There is no point in saying where the responsibility for that lies. We now have to try and push forward and bring this region into line with other regions.”
He praised the excellent work being done by WWETB and noted that it would provide training to 763 apprentices across 14 trades this year, as well as courses in Information, Communication Technology, Life Sciences, Business Admin, Personal and Social Services, Construction and Engineering.
“Apprenticeships are especially crucial in meeting the needs of industry and the labour market. I am determined that the skills of our apprenticeships are in line with industry demands and that we expand the provision of available courses to meet the increased level of apprentice registrations,” he concluded.