Current Fianna Fáil TD for Waterford Mary Butler says she will be contesting the next general election whenever it occurs.
“I personally have been making provisional plans, have contacted my canvassers, have discussed the situation with supporters over the weekend and if an election is called before Christmas I will be ready for it,” she said.
“I don’t believe anyone wants or needs a general election before Christmas, however, a situation has arisen where the Tánaiste and Government have stood idly by as the character and integrity of an innocent man was undermined.”
Deputy Butler says the situation clearly highlights two issues – lack of commitment to the whistleblower and lack of competence in dealing with the disclosure of the email.
“There is documentary evidence that the Tánaiste was aware of a campaign against Sergeant McCabe and did not act,” she said.
“Micheál Martin has met with the Taoiseach on numerous occasions since Wednesday last and has told him that the Fianna Fáil party cannot express confidence in her and that only the Tánaiste’s resignation will suffice.”
She says that, since the minority government was formed, Fianna Fáil has adhered faithfully to the Confidence and Supply Agreement.
Deputy Mary Butler topped the poll in the Waterford constituency in the general election of February 2016.
She had beaten three city based Councillors at the party’s convention – Cllr Eamon Quinlan, Cllr Jason Murphy and Cllr Eddie Mulligan. 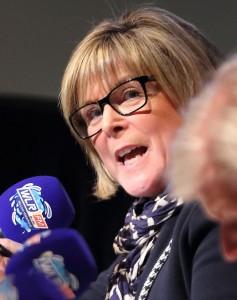 Chair of the Waterford Comhairle Dáil Ceantair Cllr John O’Leary said a convention would be held within the working week if an election is called.
He said no formal discussions have taken place at a local level as of yet, with no decisions made as to the number of candidates the party would run should an election take place.
Cllr O’Leary also pointed out that the party’s national constituencies committee will have the final say in relation to the number of candidates put forward.
He added that should a general election be called, the objective of the Fianna Fáil party will be to secure an overall majority government.
Meanwhile, the Labour Party looks likely to have two of its members running for nomination in County Waterford.
Cllr. John Pratt confirmed to the Munster Express yesterday that he is “definitely considering” putting his name forward while senior sources within the party also confirmed that the party’s area representative for Waterford City West-Tramore, Brendan Byrne, is also “likely to put his name into contention”.
It’s believed that Mr. Byrne has already expressed his interest in running within the party while Cllr. Pratt, who is an elected representative for the Dungarvan-Lismore electoral area, has been a member of the local authority in Waterford since June, 2009. He also contested the 2004 elections.
A fulltime public representative he is also the Chairperson of Tallow’s Community Council, Pride of Place Committee and his local Boccia club.
Speaking to the Munster Express yesterday, Cllr. Pratt confirmed that he is “definitely interested in running” but as we went to press hadn’t formally put his name forward.
“There is no doubt I want to run for it but I am debating strongly with myself,” he said.
“It’s likely I will put my name forward but I haven’t tied it down yet,” he added.
Similar to many, if not all politicians around the country, Cllr. Pratt expressed his hope that if an election is called it won’t happen “this side of Christmas”.
The Labour Party would likely have held its Election Convention early in the New Year but that’s now scheduled to take place this coming Thursday night in Waterford’s SIPTU building.
Mr Byrne, a former member of the Metropolitan Police Service, is a Social Care Manager and is the recently appointed Waterford City West-Tramore Area Representative. Married with three children he has a Bachelor of Arts in Theology and Philosophy and also a Higher Diploma in Applied Social Studies.
* Other confirmed candidates for the next general election at the time of writing were John Halligan TD (IA), David Cullinane TD (SF), Senator Grace O’Sullivan (GP), Una Dunphy (PBP) and Lee Walsh (Renua). Cardiac campaigner Hilary O’Neill has yet to decide if she will be putting her name forward.