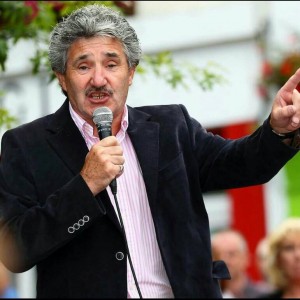 CAMPAIGNERS calling for increased cardiac services at University Hospital Waterford (UHW) have called on Fianna Fáil to “step out of government” if they do not live up to commitments made earlier this year.
During the general election campaign, Fianna Fáil made the delivery of 24/7 cardiac services at UHW a key component of their election manifesto in Waterford.
Minister of State John Halligan also vowed to deliver increased cardiac services during negotiations on the formation of the current government earlier this year.
However, Waterford and the South-East are still without this life-saving service and campaigners have reminded politicians of the commitments which they made.
A letter has been sent to Fianna Fáil leader Micheál Martin urging him to deliver the service or leave government. “If they’re not going to deliver this service, they should get out of government. They are discriminating against the people of the South-East,” said Willie Doyle of the 24/7 Cardiac Cover for Waterford and the South-East group.
He described Fianna Fáil’s current attitude to the issue as a “cop out”.
“It’s not enough to keep raising this issue and speaking about it. Fianna Fáil say they will deliver on this if they are in government but they ARE in government. They are propping up this government as it wouldn’t exist without them,” he said.
The letter sent to Mr Martin reminds him of the commitments both he and Deputy Mary Butler made in relation to delivering 24/7 cardiac services at UHW.
“When you visited the South-East on your election campaign you gave your full support as a former Minister for Health for the provision of 24/7 cardiac services in the South-East,” the letter states. 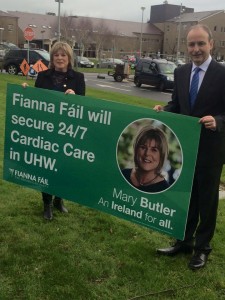 “Now that Fianna Fáil is supporting the Fine Gael led government, you need to turn your support into decisive action. The Government has continued to uphold the findings of the Herity Report which has been proven to be seriously flawed, in terms of it statistical underpinning. The 500,000 constituents of the South-East need you to act on your commitment to deliver 24/7 cardiac care, thus ensuring equal cover to that afforded to all other regions. Your party has to deliver on this service or step out of Government and halt the discrimination that this Government is showing for the people of the South-East.”
Mr Doyle and fellow campaigners met with Mr Martin when he was in Waterford as part of the general election campaign.
“He is a former Minister for Health and when we met him earlier this year he told us that he knew how important this issue is,” said Mr Doyle.
Campaigners are also calling on Minister Halligan to “re-ignite the fire” which he showed earlier this year in relation to the cardiac issue.
In September, after the release of the controversial Herity Report, Mr Halligan said that if the Government does not commit to a second catheterisation laboratory at UHW he would find it difficult to stay in Government.
In a statement issued as we went to press, Mary Butler TD commented: “Ensuring a second catherisation laboratory and 24/7 cardiac care for the people of Waterford and the South East remains a core priority for me, and for Fianna Fáil.”
She added: “Over the last number of months, since the publication of the Herity Report, I have been working constructively with all stakeholders to move the issue of 24/7 Cardiac care forward.”
“On three separate occasions, I and 42 other Fianna Fáil TDs voted for Micheál Martin to be Taoiseach. On each of those three occasions, my party leader was not supported by any other TD in Dáil Éireann.”
“If Micheál Martin had been elected Taoiseach, and Fianna Fáil was in Government, things would be different regarding the 2nd catherisation lab and many other issues.
“Other opposition TDs need to reflect on the choices they made in not supporting Micheál Martin.”
“I have secured an Oireachtas Health Committee hearing into the Herrity Report where stakeholders will be able to air their grievances with the report, and offer alternative suggestions. I will fight tooth and nail for the second lab, but I will do it in a constructive way.”
Deputy Butler concluded: “The commitment made by my party regarding a second catherisation lab and 24/7 Cardiac Care remains our party position.”