Charmed by Deise's "Lamp of Learning"

The South Door of Saint Carthage’s Cathedral in Lismore, accessed via a cobbled path laid in 1811 which in turn is flanked by lime trees planted almost four centuries ago, featured a four-legged, fur-clad sentry on Saturday last. A young tabby cat pranced and slinked around the grounds of this most serene of sites and proved almost as charming and inviting as the Cathedral itself, the boundary of which runs along both Lady Louisa’s Walk, much of which hugs the River Blackwater, and the elegant Mall. A Spanish visitor knelt on the steps inside the South Door to pet the slender feline, whose dominion of these parts was somewhat unsettled by the sight of two dogs on the cobbles, as she fled into the ornate chancel, seeking a slightly different sanctuary in contrast to St Carthage’s weekly church goers. Indeed, that was the last I saw of the ‘Guardian of Carthage’, though I suspect our paths may cross again given the regularity of my visits to this jewel in the West Waterford crown.
Examining the grounds and walls of St Carthage’s was aided and abetted by a stunning first edition I was recently gifted, titled ‘Beauty Spots in the South-East of Ireland and How To See Them By Car or Cycle’ by CP Redmond. 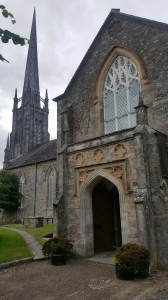 The South Door and spire of St Carthage’s Cathedral in Lismore.

Published in 1901 by Henry Gaze And Sons in both London and Dublin as well as by CP Redmond And Co in Waterford, the book offers a wonderful window into our near, pre-Independence past and features topics aplenty which I’ll return to in future columns. Of St Carthage’s, the author writes: “(It) was reconstructed several times, and the Chapter was fully formed in 1230, the revenues of which were over £1,000 a year of our present money in 1306.” And that figure echoes somewhat today, as a sign on the South Transept Wall informs visitors of the currently weekly running costs of the Cathedral which come to €1,000, hence the wooden donation barrel alongside said sign. As an aside, Redmond’s section on Lismore stated that “the present King Edward VII has promised to become the guest of the Duke of Devonshire next year (as in 1902, that is)” while: “To cyclists, it will be of interest to learn that the first bicycle seen in Ireland was made and ridden by a Lismore whitesmith, in 1866.” Similar to ChristChurch in Waterford city, the interior walls of St Carthage’s offer further reminders of our colonial past, in honouring the lives of so many Irishmen lost while in the service of the British Army throughout the world. A framed Roll of Honour, which hangs on the wall of St Columba’s Chapel in the North Transept, features the names of 31 local Church of Ireland members who were killed in action during the First World War, in addition to a further nine lost during World War II. Re-emerging from St Columba’s and passing the black-painted Steinway piano (with ‘Patent New York & Hamburg’ printed on its opened lid), complete with two ornate candle holders, I was once again drawn to the South Transept’s walls and its many memorials. With my phone powered down, I returned to my car to grab pen and paper so as to dictate just a few of them.
“Sacred to the memory of George Sheaffe Montizampert Esq, Major in HM 10th Regt of Foot Who Was Killed in action before Mooltan, East Indies on the 12th Septr 1848 in the 35th year of his age.”
“In Loving Memory of Ambrose Grattan Power – Major 3rd Munster Fusiliers of Glencairn Abbey. Born 22nd April 1887, at Arrah, Bengal, India. Died 8th December 1926 at Raboul, New Guinea.”
“Desmond Villiers Stuart, Private 7107, 16th Battalion, Australian Imperial Force, Who Was Killed In Action on the Messines Ridge in Flanders, August 7th, 1917. Aged 20.”
In the decades, let alone years following independence, these three men, and thousands more like them, were not formally honoured in the country they were born in. And if you were Catholic, one wouldn’t consider crossing the threshold of a Protestant Church site, let alone examine its interior. Those fortunate to escape the First World War still physically intact returned home in a great many instances to communities and employers who were cold to them by virtue of their British military rank; the previous admiration declared for any defence of Catholic Belgium long since forgotten.
As author Michael Smith told Immrama Travel Writing Festival goers on Saturday last, the great Antarctic explorer, Kerryman Tom Crean, presumably spoke little if anything about his three polar expeditions upon returning home due to his British Naval career. But thankfully things have changed, and for the better, a thought which crossed my mind as I leafed through Redmond’s travel book (featuring a range of both one and two-day trips around the region) and quietly strolled through the grounds of St Carthage’s. And, as a great-grandson of Skibbereen’s Patrick O’Hara, who served in the Royal Indian Navy, I for one am grateful for such a change in mindset. In a message printed in a splendid guidebook available for €2 in the Cathedral, the Dean of Lismore, Paul R Draper writes: “In prayerfulness and attentiveness to place, we might sense that nothing and no-one is truly separate. We will pray for you, as we hope you will pray for us.” A sense of welcome exhalation and much-needed pause washed over me at St Carthage’s. And while I was largely alone in my hour there, save for some feline interaction, there was no sense of separation whatsoever in that sacred, ancient space. All I felt was peace.