Home » Local News » Cheapening of Life Must be Reversed

Cheapening of Life Must be Reversed

The buzzing of the school intercom represented, in general, a welcome intervention during my days in Carrick-on-Suir CBS (1992-98).
It signalled a brief hiatus from Pythagoras, a fleeting moratorium from the Módh Coinníollach or a time-out from Trigonometry (no Maths fan was I).
But such class interruptions didn’t always catalyse boisterousness bordering on anarchy amongst the spot-dotted, voice breaking masses.
From time to time, the principal would have public reason to urge calm and extol sound conduct among his students, and with the benefit of hindsight, such words were certainly not misplaced.
Just months before I started Secondary School, someone in and around my age had died barely a half mile from the school yard after reportedly taking drugs.
I’d never seen or met the boy whose life ended all too prematurely, and his was the only such drug-related fatality in and around my school years in Carrick. One too many, alas.
Yet to mention where you went to school, even while on sporting duties in Waterford evoked a wary reaction among some, as if the town I was educated in featured alleyways populated by snipers and bossed by coke dealers. 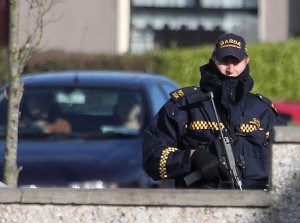 Weapon-wielding Gardaí on every street corner may not be the cure to solve our anti-social/criminality ills, but there's no denying we need more officers nationwide. | Photo: Noel Browne

Now I wasn’t alien from such sentiments myself at 11 or 12 when travelling to, say, Ballybeg or Saint John’s Park for soccer matches. The wholly ignorant albeit innocent chat on the bus going to such venues would have one thinking we’d have been lucky to get out of either place physically intact. But within less than two years of such conversations, upon hearing others lads talking about my ‘home’ patch in school terms, I could feel myself getting uncomfortable whenever anybody my age started ‘talking down’ another town or neighbourhood.
When I started making friends in Council-built estates, which, as a country boy, I only really got around to in Secondary School, something dawned on me quite quickly. The lads living over the school wall in Ballylynch weren’t all that different to me. Their mams and dads weren’t either. Most of the lads were grand, and the few that I felt weren’t, the lads that had no interest in anything other than making trouble, I just steered clear of them. It’s funny how the talk about finding trouble if you look for it almost always over-rides the reverse instance. And there’s a lot to be said for keeping things between the ditches. I wasn’t much of a scrapper – I threw one punch in six years and was never on the receiving end of a thump – but I never felt I had to make too much of an effort to stay out of trouble. And while I might have internally frowned in all-too middle aged a manner for a teenager when standing among the lunchtime hash smokers, they were always a mellow group to lean against a wall and giggle with.
They might well have been breaking the law, but there wasn’t a bully or a thug among them. And who would you rather hang out with, even nowadays at a time in life (Hi, I’m Dermot and I’m 39) when staying in is often more appealing than going out?But when I think about the few lads that appeared more comfortable being in trouble than operating in any level of peace, the more I realise that their bark was worse than their bite. And the one local lad from my school days who has sadly remained known to the Gardaí well into adulthood, never made me uncomfortable or uneasy back then, nor does he now. His life sadly appears destined to be a lost opportunity, interrupted by court appearances. Standing in Carbally Cemetery on Sunday week last, I couldn’t help wondering what has made life so cheap and redundant in the eyes of some. News of major anti-social problems and repeated levels of intimidation in a traditionally quiet area such as Dunmore East will surely have come as a surprise to those unfamiliar with the village. However, some residents have been living in fear for the better part of two years and have relayed those same fears to Gardaí. Others haven’t, such have been the intimidation levels that they’ve been subjected to.
This newspaper is aware of a direct representation made to the force just over a week prior to the fatal stabbing of Jack Power, which sought to defuse the criminal/anti-social contingent which has caused so much upset to so many. One parent told me last week about not letting her children into the village at all unless she’s physically nearby at all times. How has it come to this and what circumstances have allowed those responsible for such unease to, for want of a better expression, thrive?
Prevention is altogether more preferable to the crime Gardaí are now tasked with solving and while gun-carrying Guards cannot stand sentry on every street corner, the operational level of the force has to be strengthened. We clearly need more Gardaí. Otherwise, it’s difficult to foresee an environment in which those who appear to act without any fear of legal disincentive and punishment, will do anything other than inflict misery on neighbourhoods across Waterford and the State.
There are those living among us who operate in a sphere where they feel they can act without fear of any consequences of their actions. Their activities need to be stamped out. Their criminality needs to be brought to a ‘career’-ending halt. Those of us – i.e. most of us – who go about our business in a civic manner, act neighbourly and rear our children responsibly, just want to live our lives peacefully. Those who do otherwise ought to be brought to justice and forced to live with the consequences of their actions, behind high walls in narrow cells, for a very, very long time.