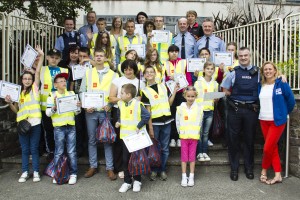 Children from the Vasilivichi area of Belarus, which is close to the Chernobyl exclusion zone, paid a visit to Waterford Garda Station last week.
The kids, who range in age from 8 to 18 years, were in Waterford as part of the annual Bausch & Lomb Charity ‘Vision for Vasilivichi’ two week summer camp.
They were accompanied to Waterford Garda Station by three adult translators, where they were given a tour by Gardaí Bernard Dowling and Ollie O’Flynn. The Regional Armed Support Unit from Cahir and the Dog Unit from Cork were also in attendance.
Mags Connolly, a clerical worker at Waterford Garda Station who organises the popular excursion, said the kids really enjoyed their visit. “The finger printing, the dogs and the bikes were a huge hit, the kids loved the interaction,” she commented.
Following the tour, the Waterford Garda Social Club provided refreshments in the canteen and the children were presented with Certificates of Attendance by Superintendent Delaney. Upon leaving the station the children were given goodie bags sponsored by the Garda Social Club.
“The Bausch & Lomb Charity ‘Vision for Vasilivichi’ is a well-deserved local charity and all at Waterford Garda Station are delighted to help out in any way they can,” Mags added.
While in Ireland the children, some of whom are visually impaired and have a number of other medical disabilities, are seen by local medical professionals, including doctors, opticians and dentists, many of whom give their service free to help the children.
The funding for the charity comes mainly from employee wage deductions and without the efforts of Bausch & Lomb staff, this would not be possible.