Home » Local News » Election » Comeragh: Between the mountains and the sea

Comeragh: Between the mountains and the sea 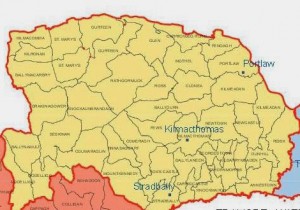 MUCH of the discussion related to last year’s amalgamation of Waterford City Council and Waterford County Council centred on the city and the perceived ‘downgrading’ of its status.
While this is still open to debate, it’s worth considering the impact which the amalgamation has had on the county.
Prior to the controversial amalgamation, there was much speculation about the unification of East Waterford and West Waterford and the need to overcome the much publicised rivalries which have traditionally existed.
The distance between Rice Bridge and Youghal Bridge was often highlighted by those opposed to the amalgamation, but little was said of the area of County Waterford which links both East and West.
Mid County Waterford is known as the Comeragh District and has six councillors, as recommended under the Local Electoral Area Boundary Committee Report 2013.
As the area between the East and West, there was perhaps a danger that the Comeragh area could be surpassed by the Metropolitan Area on one side with its 18 councillors and the Dungarvan-Lismore District on the other side with its eight councillors.
However, the Comeragh area and its six councillors appear to have thrived since the amalgamation.
Speaking at the Comeragh District AGM last week, newly elected Cathaoirleach Cllr Liam Brazil highlighted all that the area has to offer and outlined his intention to further promote the region’s tourism offering.
He called for increased signage to direct tourists to various locations throughout the area and the production of booklets to highlight specific attractions.
He said many tourists driving along the N25 through Mid County Waterford were unaware of their surroundings and the fact that they were “five minutes from both the mountains and the sea”.
Cllr Mary Butler said this description was one of the first comments she heard from Cllr Liam Brazil when elected last year, and suggested that this could become a slogan for the district.
And when you take a minute to think about it, the Comeragh District surely rivals Kerry, West Cork, Galway etc. in what it offers tourists: the Comeragh Mountains, Mahon Falls, Copper Coat, Dunhill’s Anne Valley Walk, Mount Congreve, Curraghmore, Waterford & Suir Valley Railway, beautiful beaches such as Kilmurrin, Annestown, Bonmahon and Boatstrand; and scenic villages such as Stradbally and Ballymacarbry.
And of course the hugely anticipated Waterford Greenway will be jewel in the crown of the Comeragh area once completed.
The area’s tourism offering most certainly needs to be proclaimed much louder as Cllr Brazil has stated.
Outgoing Cathaoirleach Cllr M J Ryan said there was “a glass half full” attitude amongst councillors in the Comeragh District.
At each of the monthly meetings of the Comeragh District, there certainly is a sense of co-operation amongst the councillors who represent the area.
The six councillors (Fianna Fail Cllrs John O’Leary, M J O’Ryan and Mary Butler; Fine Gael Cllrs Liam Brazil and Seanie Power; and Sinn Fein Cllr Declan Clune) are all working together for the betterment of this beautiful area.
Cllr O’Ryan hosted last week’s AGM in his own native area of Ballymacarbry and used the opportunity to showcase the village.
Ballymacarbry’s impressive Community Centre and the nearby houses for the elderly are a credit to everyone involved in their development.
Members of the Tidy Towns group were visible in the village as they went about their work in ensuring the area looks its best ahead of the eagerly anticipated visit by the competition’s judges.
The importance of such community pride is something which Cllr O’Ryan emphasised during his tenure as Cathaoirleach.
A special ceremony in recognition of the efforts of Tidy Towns groups in the Comeragh District was hosted earlier in the year.
Ballymacarbry village is very much reflective of villages throughout the Comeragh District where small communities are coming together for the betterment of their areas.
And of course the valiant efforts taking place in Ballymacarbry are replicated in communities throughout the Comeragh area be it any of the other Tidy Towns groups; the Comeragh Community Development Group; Portlaw Task Force etc.
Many of these communities may be relatively small in size, but are certainly big in spirit and enthusiasm.
With the support of the Comeragh’s six councillors, these communities will continue to go from strength to strength.
And with so much to offer, there surely is a positive future ahead for this beautiful area of County Waterford.