Ballygunner selector Padraig Connolly admits that playing the All-Ireland Club Semi-Final a fortnight after his team’s sensational Munster Final display would have been preferable.
“I’d have to agree with that,” he said when that scenario was presented to him. “But you can be sire that the Ballyhale backroom staff would have liked to have played us in December as well. Both teams were hurling very well for a number of weeks and yes, it would have been better to play the game earlier, there’s no getting away from that.” The Gunners lineman added: “But the reality is that both teams are heading into this semi-final on the back of a two and a half month break and it’s been up to us to manage that gap. But whether there’s two weeks or 10 weeks between a match, ultimately it’s all going to come down to what team performs nest on the day so to a certain degree, the form and momentum generated by the closing stages of the County Championship and the subsequent provincial campaign. This is essentially a fresh start for both teams.” 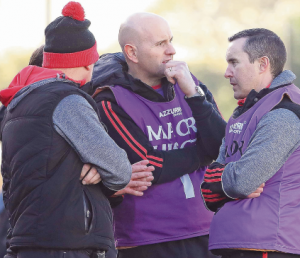 The Ballygunner brains trust is attempting to plot a path to Croke Park on St Patrick's Day.

Could the break actually prove advantageous? “Yeah, absolutely but again that applies to both teams. When you’re preparing for a match like this, which wasn’t always the case in the past, thanks to games being televised, you’re in a position to get a better, in-depth look at the opposition, bit of course it’s exactly the same for Ballyhale. And sometimes you can spend too much time focusing on the opposition and take your eye off your own players and what they’re capable of, so it’s very important for us to focus on our game and not worry too much about the opposition.”
With no major injuries to report ahead of Saturday, and fresh from a recent training weekend, Padraig Connolly is pleased with Ballygunner’s mindset ahead of the clash with their Kilkenny neighbours. “For me, there’s been something really special, particularly in the last 10 to 15 years about Waterford/Kilkenny games and hopefully the game on Saturday will be another great match,” he said. “I think the game will bring the crowd out, Kilkenny teams always well supported but so are Waterford teams and we hope hurling supporters from across the county will come out in great numbers to support us.”
He added: “The support we had for the Ballyea and Na Piarsaigh matches was incredibly vocal; I’d go as far as saying it was really crucial for us. When we were under pressure in the Ballyea match, the supporters really rallied us. They never gave up and neither did the players. The supporters really can be the 16th man and I hope we have that support again on Saturday and give them something to cheer about.”
Padraig commented: “I think our familiarity with Semple Stadium could well be a help for us but Ballyhale are far more familiar with the All-Ireland Club Championship than we are – and they’ve more titles than anyone else. They may not have played in Semple as much as we have so maybe we have a slight advantage in that respect, but their record in this competition is nothing short of phenomenal…
“We’ve got a massive level of determination and pride going into this game but we’re not thinking about it from the perspective of doing something no Ballygunner has ever done before (a point this reporter made) – we really are just trying to take it as one game at a time. Of course the challenge has been to try and manage this period of time and it’s new territory for most of us. Fergal (Hartley) has been there before and Rory (O’Sullivan) for that matter, but in general, we’re in unchartered waters.”
Said Padraig: “This is a phenomenal group with a top-class attitude is perfect. These guys might be amateur players but their approach has been so professional; they’re eager to produce their very best effort to try and win the game next Saturday. But had on heart, none of us are thinking about the All-Ireland Final. This is a huge game for us, we’re not going to underestimate Ballyhale for one minute and we’ll be doing all we can to win.”