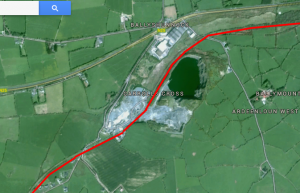 WORK is to begin immediately on the Ballinroad-Durrow section of Waterford’s eagerly anticipated Greenway.
There has been a broad welcome to the news that the long-standing court injunction, which had delayed developments along the route, was lifted last week at Waterford Circuit Court.
This paves the way for work to proceed on the project which has been renamed the ‘Waterford Greenway’.
Speaking at the June plenary meeting of Waterford City & County Council last Thursday, Cllr Liam Brazil (FG) welcomed the awarding of the ‘green light’ for the project.
He thanked the Council for bringing the project to its current stage and asked how long work would take on the developing the Ballinroad-Durrow section.
Director of Services Paul Daly explained that work would start immediately.
Mr Daly said the council hoped to have the Ballinroad-Durrow stage completed by September.
Over the past six months, clearance of the line has taken place from Ballinroad to the edges of Waterford City at Bilberry.
Extensive work has taken place on the stretch from Bilberry westwards towards Kilmeaden with the laying of the path together with major associated works including cutting, infilling, fencing and investigation of the many small bridges along the way.
The Dungarvan to Ballinroad section has been completed for a number of years and is used intensively by walkers and cyclists, both locals and tourists, with a loop down to the very popular Clonea Strand and Ballinacourty Lighthouse.