Home » Local News » Cracking Start to the year at Tramore

Cracking Start to the year at Tramore 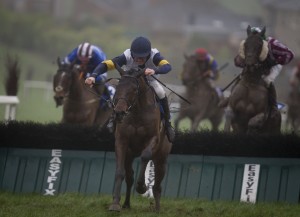 Despite the wet conditions there was a reasonably sized crowd for the
traditional New Year’s Day meeting at Tramore. All were well wrapped up and as the meeting progressed the heavy rain lessened. The Gordon Elliott trained and Kevin Sexton ridden Roi de Mee (5/1) won the featured At The Races listed chase where there were just three finishers in the six runner field. It was another success for powerful owners Gigginstown House Stud who won four of the seven Grade 1 races at the Leopardstown Christmas Festival.
Kieran O’ Connor did a fine job as MC in the parade ring and overall
the organisation was very good. The wet conditions took their toll on the horses with four horses pulled up in the 2m 5f handicap hurdle which was won by the James Dullea trained West Of The Edge (2/1f) in the hands of Waterford jockey Declan Queally. It was the second leg
of a double for Dullea who earlier won the 2m handicap
hurdle with the Paul Townend ridden Just Get Cracking (6/1). Queally completed a double of his own when he won the 2m
beginners Maguire trained Davinia’s Tip (11/4).
There was a short price double for Ruby Walsh who won the opening David Flynn Building Contractors maiden hurdle on the Avant Tout (4/9),
owned by the Supreme Horse Racing Club and trained by
Willie Mullins. Walsh teamed up with Mullins once again to win the
Curran South East Cleaners maiden hurdle with Sambremont
(8/15).