Criminality is no laughing matter 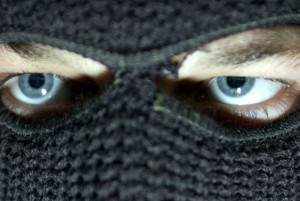 There's nothing laughable about burglaries. Remarkably, some people disagree with that opinion.

Last Friday’s Ulster Bank robbery on The Quay must have been a terrifying experience for the bank official who had a weapon – be it real, imitation or otherwise – directed at them by the raider.
Alas, in this knee-jerk social media environment, someone with a relatively decent public profile in this city took to her Facebook page and made a joke of the incident; alluding that the raider in question was some type of Robin Hood character.
There’s nothing remotely humorous about having a weapon pointed at you. There’s nothing remotely humorous about being the victim of a crime.
There’s nothing remotely admirable about the individual, regardless of the motivation for committing such a crime, for doing what he did on Friday last. And to those who made the childish ‘sure didn’t the banks rob us’ charge in the wake of last Friday’s raid, two wrongs still don’t make a right.
The reality of the Irish criminal underworld’s callous capability has been glorified by (a) the nicknaming of the worst among us by the national media – RTE as well as the tabloids – and (b) the manner in which Love/Hate has blurred reality for the more impressionable among us. And if anyone thinks the late Martin Cahill is someone worth championing by virtue of his antics outside the Four Courts in the early 1990s, and choosing to ignore his nailing a man to a pool table, then shame on you.
Cahill fans are as ill-advised in their admiration as that thoroughly stupid, ill-informed and utterly native Facebook posting that ground my gears on Friday last.
If your home or your car has been broken into, if you’ve been mugged or attacked on the street, then you know only too well that crime is no laughing matter.
The crime itself and the shock catalysed by it lives with victims for months and, in some cases, years afterwards.
Indeed, some people never recover from such an attack and I know more than one person whose social behaviour in the wake of a robbery has been negatively impacted upon.
And a jail sentence – if one is fortunate enough to have their violation resolved, at least in a legal sense – does not guarantee peace of mind for a victim.
Going away for a holiday, even on a weekend, has been ruled out by some people I know who have been burgled in recent years.
And when such victims do leave a house, doors and windows are double and treble checked before leaving the home, even if it’s only for only a few hours.
Timers for lights have become necessary in practically every home in the country, particularly in rural Ireland, to give the impression of there being someone at home after nightfall.
And the repeated theft of home fuel has led to some rural dwellers constructing stainless steel cages – and even entire sheds – to house their heating oil tanks, in an attempt to fend off vagrants whose only job is to inflict misery on people who are out working, paying taxes, making a genuine contribution.
These same individuals regularly drift in and out of our courts, on legal aid of course, and effectively stick two fingers up at the rest of us when some nonsensical excuse is offered for such behaviour before a royally ticked off judge.
They take whatever legal knuckle wrapping a judge can sanction and then go out and offend, and offend and offend again. And civil society continues to suffer at these individuals’ hands. No heroes are they. Robin bloody Hood my eye.
The opening week of the general election campaign saw the voting public, as I alluded to last week, reduced to economic indicators. Digits on a ledger. Statistics. Not people. The Thatcherite notion of there being “no such thing as society” has been difficult to shake off in recent days.
All this fiscal space hogwash matters not a whit to someone who has been beaten by a burglar, nor to someone those who have had cherished possessions swiped from them and, in all likelihood, pawned off within days of the crime.
Operation Thor has recorded some successes in recent months, and that’s to be welcomed, and the increased level of Gardaí due to come on stream over the next two years is not before time either.
More Gardaí on the beat instils public confidence and it would be welcome to see set times for officer availability come into play in rural localities (since stations will not be re-opened), established by the next government.
Forms need signing just as much as crimes need to be reported and it would be particularly helpful for elderly residents if a timetable of such a kind came into play for rural communities: where possible, couldn’t such a service be provided for at a post office?
It’s wholly regrettable that it took the murder of Veronica Guerin to stir a government into action, and there’s no doubt that the subsequent establishment of the Criminal Assets Bureau hit the criminal fraternity hard. Very hard.
In the interim, a slew of management positions were added into the public service by virtue of the Health Service Executive’s establishment, when resources, within the health service and An Garda Síochána, could surely have been more wisely invested.
Sadly, it may well take another appalling incident to stir a future government into a CAB-like innovation to crack down on the criminal underclass who have no respect for the rule of law.
And the more of these vermin we get off our streets, the better. But we should not be shocked into such action.