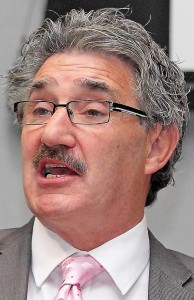 Second cath lab secured in Government negotiations
Funding to provide a second cath lab at University Hospital Waterford and extend cardiology services in the interim became the ultimate deal ‘maker or break’ in the election of the new Government on Friday last.
In a deal hammered out by Waterford TD John Halligan, the new Programme for Government commits to an independent clinical review into the cardiac needs of the region is to be carried out within 6 weeks, with funding ringfenced to provide a second cath lab at UHW and extend the opening hours of the single cath lab in the interim. A letter from Finance Minister Michael Noonan to Deputy Halligan confirmed that both capital and revenue funding would be made available for the development, pending the result of the review.
Deputy Halligan said the review was a ‘formality’, since UHW consultants involved in the talks were fully confident that Waterford substantially exceeds the necessary throughput to warrant the second cath lab. He admitted that signing up to support a Fine Gael-led minority government was one of the toughest decisions he ever made but said he did so to get the ‘best possible deal’ for Waterford.
“It became clear to me during the ongoing negotiations – particularly when Fianna Fáil agreed to a minority government arrangement – that Enda Kenny was going to be re-elected Taoiseach”, Deputy Halligan continued. “I had a clear choice, go back to the Opposition benches for another couple of years or plough ahead and get the best possible deal I could for Waterford. There was no other Waterford TD in a position to do so and if I hadn’t stepped up, Waterford would continue to be the forgotten county for another Dáil term.”
Both Deputy Halligan and UHW Consultant Cardiologist Dr Patrick Owens, who participated in the negotiations, say there is no question that the review recommendation will be favourable.
“The current volume of patients coming in with both acute and sub-acute issues greatly exceeds capacity,” Dr Owens noted. “The statistics speak for themselves, it is an irrefutable argument.”
He added that inpatients with scheduled dates for urgent cardiology treatment at the hospital were currently waiting over seven days for their procedure. The national guideline is 24 hours. “That is not a service that has adequate capacity for the workload coming in”, Dr Owens added.
While the second cath lab is being completed, Deputy Halligan has secured a commitment that on-call cardiology cover will be made available at weekends. Furthermore, funding has been guaranteed to allow for the recruitment of staff to facilitate the extension of existing lab hours at the hospital on a phased basis.
“Hospital management are being asked to review the resourcing necessary to extend the existing lab hours, so that this process can get underway without undue delay,” Deputy Halligan added. “These staff will already be in place when the new cath lab opens.”
Major success story
Willie Doyle of the 24/7 Cardiac Care for Waterford and the South-East campaign group has described the deal as a ‘major success story’ for the region.
Mr Doyle, who was also involved in the negotiations at Leinster House, said cardiac care in Waterford and the south east had been completely neglected by politicians in the past. Reacting to negative comments on social media regarding Deputy Halligan supporting an Enda Kenny-led government, Mr Doyle said people need to focus on the people whose lives will be saved as a result of the deal – and not the politics which brought it about.
“We have been fighting this campaign – running with the ball – for the past two years. John Halligan took that ball and brought it over the line, for Waterford and for the region”, he added. “This is about people, not politics.”
Deputy Halligan paid tribute to Dr Owens and other members of the cardiology unit at UHW who were involved in the negotiations, along Mr Doyle.
“The people of Waterford need to be aware that they have a fantastic team at UHW and also in the 24/7 advocacy group, all of whom went above and beyond with their time and knowledge during these negotiations. The deal would not have been gotten over the line without every one of them.”