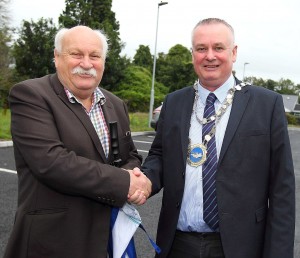 Mayor Sean Reinhardt congratulating Davy Walsh for all their years of campaigning at St. Patrick's Hospital

Construction of new unit to commence next month
by Justine Dwyer
After almost a decade of protests, the impasse between picketers and the HSE regarding the future of Saint Patrick’s Hospital is over following the news that work on the new hospital is to commence by mid-September.
The Matron of St Patrick’s Hospital informed the picket last week that a contract had been signed with JJ Rhatigan construction, with the project scheduled to run for 70 weeks.
Work is due to commence on September 15th and as the entrance on John’s Hill will be exclusively used by the building contractor, a new entrance will be constructed on the Inner Ring Road.
Protestors welcomed the news and said they were delighted that after nine and a half years of a hard fought campaign, the issue had been brought to a successful conclusion. However they remained cautiously optimistic about the project and said they wouldn’t believe it was happening until they saw contractors on site.
It’s been a long road for the action group who have stood outside St Patrick’s Hospital every Tuesday for nearly a decade campaigning for a community nursing unit.
Their journey began in 2008 when the 19-bed St Brigid’s Ward was closed by the HSE following a report by HIQA which cited concerns about health and fire safety.
The Government promised a 100-bed unit but then reneged on their promise leaving the action group to carry on their fight. Their campaign has finally borne fruit with the news of the €19 million, 100-bed unit coming on stream in two stages.
Speaking to The Munster Express this week, former city councillor and group spokesperson, Davy Walsh said he “was over the moon.”
“It took a lot of blood, sweat and tears. There was a core group of us who never missed a picket day in the nine and a half years. We turned up every Tuesday, hail rain or shine Some fellas wouldn’t even take holidays because they didn’t want to miss a picket,” said Davy.
He paid tribute to the general public of Waterford for their support during the campaign, the Waterford Trades Council for what he described as their unflinching support and the local media for keeping the campaign to the forefront.
Davy also paid tribute to the support the protestors received from the late Tom Clydie Power, his daughter-in-law Evelyn, nephew Christy Walsh, as well as Ned Hartley, Michael Foley, John Breen, Sean Brett, Noel O’Connor “and each and every member of the committee who gave unstintingly of their time in all weathers. We also wish to thank the staff at St Patrick’s for the care, attention and love that they give to the patients.”
Meanwhile, Metropolitan Mayor Sean Reinhardt said he was delighted with the news. “Those men have been there since 2008 and they never once waivered. Everyone in Waterford holds St Patrick’s in such high esteem and it has served the city, county and beyond well.”
Cllr Reinhardt said the core group of 25 men turned up every Tuesday for nearly 10 years to picket. “Without their persistence and people power we probably wouldn’t have gotten a result. But they stuck it out till the bitter end. It is a great reflection on them and on the people of Waterford for supporting them.”
The picket will cease when building work commences.