Eadaoin Halligan on her body of hard work

Eadaoin Halligan sits down for a chat in The Granary having just completed a gym session. The 28-year-old Ballygunner resident is a picture of health; her dedication to fitness physically manifested by her toned frame but equally evident through her sunny disposition.
On the basis of 40 minutes in her company, she appears as internally strong as she is outwardly, proof positive of the benefits of eating ‘clean’ and diligent training.
In sports psychology terms, she’s in a good place, and almost where she wants to be at in terms of her conditioning. Almost!
I must confess that our chat prompted me to boil a couple of eggs at home for elevenses more than once in the past week, while also reintroducing myself to my dumbbells. Baby steps and what not.
Over a mushroom omelette made with skimmed milk (having checked with the kitchen that they did in fact have skimmed milk), Eadaoin spoke about the Irish body fitness competition circuit in which she’s made quite the impact over the past year.
“Body fitness focuses on the figure and how you retain your feminine quality despite committing to some very serious levels of exercise and training,” said Eadaoin, who was a top 12 finisher in the Miss Bikini Ireland competition.
“Now, hair, make-up and bikini are all part of the competition too, and judges are also looking at the tone of the body and certain other aspects: everything is being adjudicated, really.”
Which brings us onto a topic I’ve probably discussed less than twice over the past decade: fake tan and its significance. 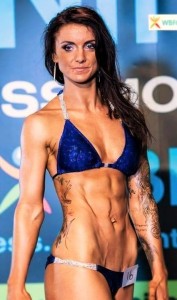 “Oh, yeah, spray tanning is a must,” says Eadaoin, while tying her hair up into a bun. “When you’re up on stage in a bikini, even with two coats of tan on, I can still look quite pale with the strength of the lights directed onto us, so I’m going to have to use a different, darker tan in my next competition, while avoiding the prospect of looking like an ‘Oompa Loompa’! Most women feel better with a tan on anyway, but when you’re up on stage, in a bikini, being scrutinised, you want to look at your absolute best for a competition.”
And that brought us onto a topic I’ve probably discussed even less than fake tan in the past decade: what it’s like to be up on a stage, in a bikini, being scrutinised by dozens, if not hundreds of pairs of eyes. Much of this discussion was as alien to a bearded country boy as requesting skimmed milk in my omelette!
“I don’t mind it,” Eadaoin replies. “I go into a different world when I’m on stage. I don’t see anything or anybody: I just see black. I know what I have to do, I have a routine in my head about what I have to do, I smile and that’s it.
“A lot of the time, it’s all over before you know it and then I’m back to reality pretty quickly once I’m off stage…and to be honest, after the Miss Bikini Ireland competition, I felt there was more in me, something else I could do – I felt I was too toned for a bikini – and that’s where the body fitness idea came in, and I’ve been busy with a fitness programme devised by Caroline Moran in Educogym, and it’s working really well for me.”
Eadaoin, who when she’s not training is kept happily busy by her two children (aged two and six), said that body fitness and all that goes with it has given her “a new lease of life”.
She continued: “I was never even a gym person before all of this, but I’ve really found a passion for it now and Caroline has helped to nourish that passion for me; she’s fantastic. She’s with me every time I’m in the gym while I train and that’s golden: having someone there to encourage you, someone incredibly strong minded like Caroline, I tend to lift heavier when she’s there. She’s been an incredible influence and an absolutely fantastic support to me – I’m like a lost puppy when she’s not there.”
Come April 24th, Eadaoin will cross the border to compete in her first event of the year and a great deal of her waking time between now and then will be committed to building muscle and improving tone.
“I won the Miss Toned Over-21 World title last November, so it’s good to know I’m doing something right,” she added, with a smile that hardly left her face throughout our conversation.
“I’m still very new to all this, I’ve already done well in competition and it’s become a real passion for me, something I love in a way I couldn’t have anticipated not all that long ago. It’s very exciting and I love the focus it has given me in life. What can I say? I just really, really love it.”
By the way, weights don’t make women bulky or less feminine, in Eadaoin’s view.
“It’s the complete opposite. You can be slim and have muscle and still be very sexy, I feel. And if you can be slim, fit and toned, I feel that can only benefit your body image. It’s certainly done that for me, and I’m so excited about competing this year, and seeing where I can go with this. And it’s making me very happy, and that’s all that matters.”